A hieroglyphic script in which the earliest Central American texts were written has been partly deciphered, thanks to an engraved slab found by fisherfolk. 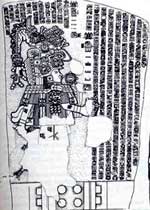 A FOUR-tonne stela -- an upright slab usually used as a gravestone -- discovered accidentally by fisherfolk at the small fishing settlement of La Mojarra near Vera Cruz, Mexico, has enabled archaeologists to crack a complex pictorial script widely used in Central America 2,000 years ago.

Part of the engravings on the stela have been deciphered by two US archaeologists as being written in epi-Olmec, a hieroglyphic script that is thought to have evolved from the written language of the Olmec civilisation, which flourished in Central America from 1200 BC to 500 BC. Epi-Olmec is known to have been a popular script in the region as late as 150 BC.

The archaeologists, John S Justeson of the State University of New York at Albany and Terrence Kaufman of the University of Pittsburgh, conducted a detailed linguistic analysis of the inscription on the stela, discovered in La Mojarra in 1986. They used the text on another artefact, the so-called Tuxtla statuette discovered in 1902, as an independent control. Linguists are aware that a single text cannot also serve as its own key (Science, Vol 259, No 5102).

The analytical work by Justeson and Kaufman is reminiscent of the manner in which Egyptian hieroglyphics from the days of the Pharaohs were deciphered by Thomas Young and Jean-Francois Champollion in the early 19th century. Their work was made possible by the discovery of the Rosetta stone, a tablet containing a single text inscribed in three different languages: Egyptian hieroglyphic, Greek and Coptic, the last a derivative of Egyptian. By determining the correspondence between known Greek words and those in the Egyptian text, the meaning of the hieroglyphs were gradually pieced together by Young and Champollion, working separately.

In the case of the La Mojarra stela, however, no such bilingual correspondence was available. Justeson and Kaufman had to rely on the fact that epi-Olmec writing is related closely to scripts used in the Mayan civilisation and that the numerical and calendrical systems in both were identical.
The two US archaeologists determined the language represented on the stela is an early form of Zoquean, a member of the Mixe-Zoquean family of languages, derivatives of which are still used in parts of Mexico. Zoquean script consists of 11 consonants and 6 vowels and it is written in columns from left to right. Signs with the same width as the column mostly represent syllables or words.

The inscription on the stela stretches over 21 columns and is the longest, single extant text in the epi-Olmec script. The text refers to a warrior-king and describes his rise to kingship after several years of conducting warfare and rituals. A portrait of the king is also engraved on the stela.

The frequent occurrence of the same symbols at the beginning and end of columns indicated their role as clause-ending or clause-initial signs. The grammatical structure of the stela text was reconstructed by Justeson and Kaufman on the basis of what is known about the grammar of Mixe-Zoquean languages.

However, working out the pronunciation of the various stela hieroglyphs required precise identification of the language used in the text, because though the epi-Olmec script forms a common basis for the entire Mixe-Zoquean family, it consists of a large number of languages, some of which have split into many dialects over time.

Justeson and Kaufman say they identified the language of the stela inscription by combining archaeological evidence and grammatical analysis, but the process of decipherment is still continuing. They stress that more monuments inscribed in epi-Olmec are essential to provide added material for further textual analysis.