And justice for all?

In the search for their rightful place in things, the adversaries of the Sardar Sarovar project have taken the issue to the highest court in India 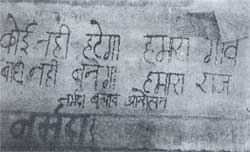 THE Narmada Bachao Andolan's decision to approach the Supreme Court of India has now become the crux of its continuing agitation. The NBA filed a comprehensive petition on April 17 pleading that the construction of the Sardar Sarovar dam be halted. On their part, the respondents -- 4 state governments, 3 Union ministries, the Sardar Sarovar Narmada Nigam Ltd and the Narmada Control Authority -- claimed that the project work has been undertaken "satisfactorily".

The petition came up for hearing yet again on July 26, when the Court fixed the dates for the final hearing between September 5 to 8. The reaction of the 3-judge bench, headed by Chief Justice M N Venkatachallaiah, however, sent out positive signals to the NBA. Responding to the plea that the Court appoint a fact-finding commission to investigate the status of rehabilitation, the Chief Justice replied that the Court felt that the authorities had lagged behind.

The Court also responded favourably to the nba's special leave petition, which pleaded that the stay on making public the report of the Union water resources ministry's review committee be vacated. The report was submitted to the ministry on July 21. However, the Gujarat high court ordered that it be kept under wraps until petitions seeking the declaration of the committee as illegal were dealt with. The apex court directed the government to submit the document to the bench for perusal and decided that the petition would be heard on August 25. "We will await the verdict and the review report findings," says Medha Patkar.

"We had explored several avenues and now felt it was necessary to approach the highest judicial body in the country," says NBA's Himanshu Thakkar. But prominent environment lawyer M C Mehta cautions that similar petitions opposing the Tehri dam and the Kaiga nuclear power plant have been returned to the environment ministry and the Atomic Energy Commission, as the Supreme Court considered them "technical issues".