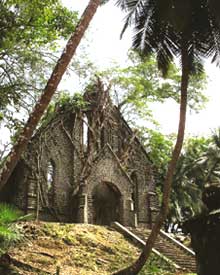 the Andaman and Nicobar administration has decided to open 50 sites in 15 islands to set up environmentally sensitive hotels and beach resorts under the Union territory's 2006 tourism plan.

"In the first phase, tenders will be invited for five islands. Depending on the response, the other islands will be opened to bidders by 2008," says Dharam Pal, tourism commissioner and secretary, ministry of tourism, Andamans . "We have already sought clearance from the Union ministry of environment and forests and the coastal zone management," says Pal. The government is also keen on implementing green globe standards -- a global benchmarking certification and improvement system for environmentally sensitive projects -- for these hotel projects.

But environmentalists are against it. "Added pressure of tourism will have an adverse impact on the ecologically fragile islands. Besides, there is no concrete plan related to transport," says Pankaj Sekhsaria of Kalpravriskh, a Pune-based ngo working in the islands . Ecologists further fear the influx of tourists might affect the tribes on the islands.