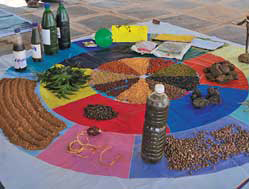 Group certification for organic farmers in the state

ABOUT 6,000 farmers from 138 villages in Andhra Pradesh who practise organic farming can next year expect a premium price for their produce. Certification by the National Centre for Organic Farming in Ghaziabad will help them earn more.

The Society for Elimination of Rural Poverty (serp), under the state's rural development ministry, has initiated the certification process. serp has been promoting non-pesticidal management (npm) programme in the state (see 'Made it', Down To Earth, January 1-15, 2009). The farmers selected for certification first gave up use of synthetic pesticides under npm programme and then switched to organic farming which does not use synthetic fertilizers either. They have been practising organic farming for the past two to three years.

The National Centre for Organic Farming along with the Organic Farmers' Association of India will train these farmers to become field inspectors and conduct random checks for soil and crop quality, and maintain field records. The six-month training will begin in May and organic certification will be given late next year.

"We are going for group certification under the Participatory Guarantee Scheme so that it is cost effective for the farmers and they get a better price for their produce," said T Vijay Kumar, the chief executive officer of serp (see box). "There is a large potential in the domestic market for chemical-free produce which we want to tap," he added.

The certification will fetch the farmer an additional Rs four to five per kilogramme for each crop. The certified produce would carry a unique number indicating its origin. A brand name is yet to be decided, said Jayaram Killi, consultant with serp . Export potential will also be explored, he added.

Though EU and the US do not accept such certification, it opens avenues for export of organic farm produce to Latin American countries.