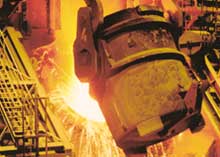 a software has been designed to check the air pollution caused by plants manufacturing sponge iron. Known as the Environmental Compliance Monitoring and Control System (ecmcs), the software will monitor the functioning of electrostatic precipitator (esp), the main air pollution control device in sponge iron units. In case of improper running of esp, the software triggers an interlock system, bringing production to a halt.

Developed by the West Bengal Pollution Control Board in collaboration with Tata Consultancy Services, ecmcs was pilot tested on September 5, 2005 in a one hundred tonnes per day capacity kiln at Durgapur. "This software will be made mandatory for every sponge iron-producing unit in West Bengal," says a wbpcb official.

In a sponge iron unit, iron ore is directly reduced in the presence of coal, dolomite and hot air in a rotary kiln (furnace) producing porous and spongy iron. It also produces gas laden with suspended particulate matters mainly containing coal dust. The gas is passed through esp, which charges the particulate matter and traps it.

wbpcb officials say most units shut down esps at night. As a result, the suspended particulate matter escapes into the air, harming people, crops and waterbodies. "If esp remains closed, the software will activate an interlock system, which in turn stop the raw material (iron ore, dolomite, and coal) feed to rotary kiln that churns out sponge iron," remarks the official.