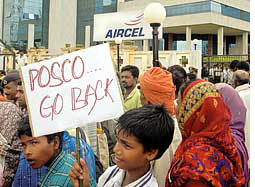 the three villages in Orissa that face displacement due to posco's plans to set up a steel plant and a captive port, were cordoned off by the police recently. The situation took a violent turn when "pro- posco" groups attacked "anti- posco " groups on November 29.

The anti- posco agitators say the violence was perpetrated by outsiders "sponsored" by the state, giving a pretext to the police to take over. "Around 200-300 people attacked our camp. They threw six bombs, torched our tents and broke our bicycles," said Prashant Paikrey of the Orissa Bachao Andolan, a protesting group. Paikrey added they were conducting a peaceful protest on November 23, when the police tried to stop them.

People of Nuagaon, Gandhakujanga and Dhinkia--the three villages that face displacement--have been protesting the plant on the grounds that the environmental clearance was wrongly granted to posco after a false environment impact assessment and public hearing (see 'No steel', Down To Earth, May 15, 2007).

According to SP Mishra, public relations officer of the Orissa governor, the state administration has taken control of the situation and "is still trying to convince villagers that the place is the best site for the steel plant because of its proximity to the proposed captive port posco plans to build". Mishra, however, said the captive port plan had not been finalized.

But villagers are resolute. "The land here is more fertile than anywhere else in Orissa. We grow two crops a year here without any government help because the groundwater level is good. We have the best soil for betel leaf here in Jagatsinghpur. We also export it to Pakistan and Bangladesh. Their compensation cannot bring our livelihoods back to us," says Praful Das, a resident of Dhinkia village.