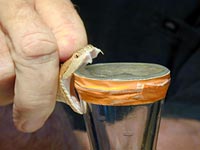 eggs will soon offer an inexpensive antidote for snake bites, if scientists in Bangalore have their way. Biochemists at the Vittal Mallya Scientific Research Foundation (VMSRF) have developed the antidote using chicks. The process starts with immunising chicks when they are four weeks old. A small amount of venom is injected in them at the age of 12 weeks. During the next eight weeks of their development, they produce antibodies against the venom, which are passed on to their eggs, making them potent antidote sources.

Once the cure clears a battery of clinical trails, it can replace the use of horses and sheep. Most of these animals are left bleeding and infected with maggots after their serum is extracted from the blood, following which many die. For producing the antidote, four types of snake venom are injected in the horses.

The antidote is administered in partially purified form. Large volumes are needed for treatment. It even has side affects, such as serum sickness and allergic reactions, which at times prove fatal.

According to P V Subbarao, scientific director of VMSRF, the amount of venom that comes out of one litre of horse blood could be extracted from just 50 eggs (a single hen lays 240 eggs annually). Tests are being conducted to determine whether it has any side affects. If given a clean chit, it could prove to be a major breakthrough, as India has one of the highest casualty rates of snake bites in the world.