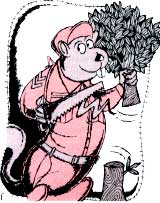 General Juan Domix Peron's idea of introducing beavers in Tierra del Fuego, the snowy archipelago on the tip of South America, half a century ago seems to have gone seriously awry. In 1946, someone in the late president's navy came up with the idea of colonising Tierra del Fuego with 25 beavers to promote the fur industry has now taken gigantic proportions.

The beavers have cut down hundreds of acres of forests to build dams hundreds of feet long. Their architectural wonders of branches and mud make fine tourist attractions, but they are also re-routing streams and rivers, thereby interrupting trout migrations to traditional spawning grounds. These beavers have created hundreds of artificial lakes that are flooding forest land and roads, threatening the livelihood of cattlemen and farmers. But what scientists fear most is that one day the beavers may manage to swim or be smuggled across the Magellan Strait and invade the Andean forests.