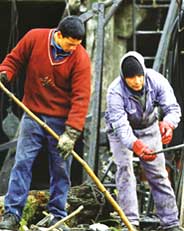 The Argentinian government has once again unveiled a comprehensive clean-up project for the river La Matanza, better known as Riachuelo, and declared its pollution an "environmental emergency".

In 1993, the government had approved a three-year project to clean the river, but it never started. Environmentalists, however, are optimistic this time, since the clean-up project is in response to a Supreme Court order that directs the federal, provincial and municipal governments and 44 companies to clean up the Riachuelo. At least 10 per cent of the country's population live in the river basin. The riverbank is dotted with more than 3,500 industries and 42 open garbage dumps. Numerous illegal sewerage pipes, too, directly open into the river, making it one of the three worst-polluted rivers in the world. The government hence plans to set up a River Basin Authority with policing power to fine polluters.