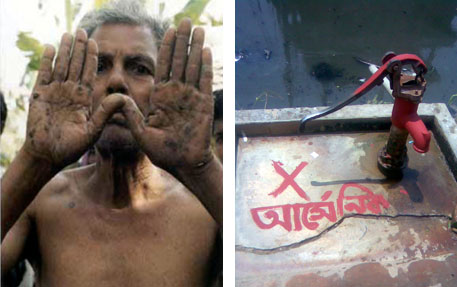 Driving across Bangladesh’s port city Chittagong, one sees red marks on several tubewells. A closer look reveals red and scaly patches all over the body of most people living in the vicinity of those tubewells. Common among the poor and those living in slums, the skin disorder is the initial symptom of arsenic poisoning.

Arsenic is a heavy metal found naturally in the earth’s crust. At places, it mixes with groundwater, contaminating food crops and causing alarming threats to the health of humans and livestock. Prolonged ingestion of arsenic-contaminated water can result in health complications, ranging from gangrene to skin cancer. The concentration of arsenic is high in Chittagong’s shallow aquifers. As the city lies in the low-lying floodplains of Bangladesh, water remains stagnant here and the fine-grained silt and clay rich in arsenic gets deposited in the shallow aquifers, says Kazi Matin, professor of geology at Dhaka University.

Two-thirds of the city’s 5.5 million population depend on groundwater. Seven of the 41 wards under the jurisdiction of the city corporation have high arsenic contamination (see graph), according to a study by Chittagong University of Engineering and Technology (CUET) in association with Chittagong Engineers Institute and the Bangladesh Environment Forum. 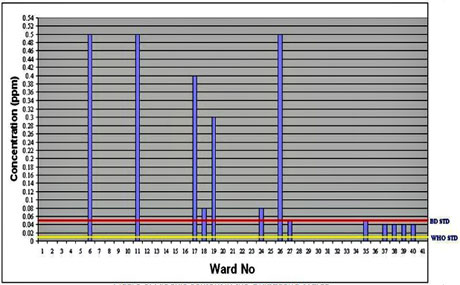 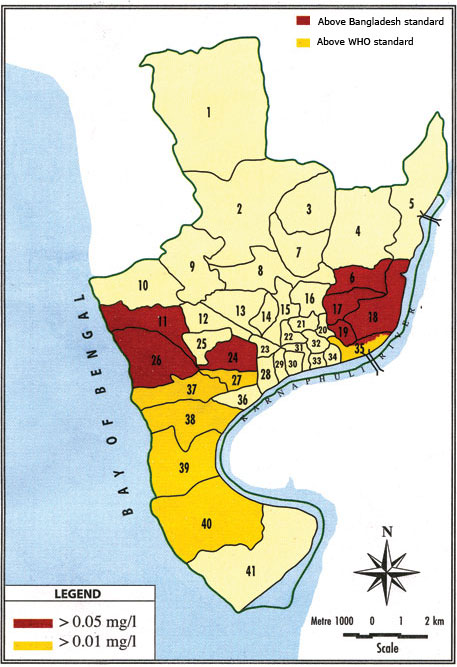 Swapan Kumar Palit, professor at CUET, says the Water Supply and Sewerage Authority (WASA) supplies water to only to one-third of the city population. As digging deeper tubewells and borewells is expensive, the poor and slum dwellers have to rely on shallow aquifers. The arsenic contamination levels is thus taking a toll on the unprivileged.

According to the WHO guidelines, the permissible limit for arsenic in water is 0.01 ppm. Going by this standard, 60 of Bangaladesh’s 64 districts are arsenic contaminated. The country, like its neighbour India, has, however, set its standard at 0.05 ppm. The study by CUET found that arsenic contamination is high in several areas both by the standard of Bangladesh and WHO.

The government authorities, however, deny the presence of arsenic in drinking water. Ezaz Rasul of WASA-Chittagong claimed that the authority provides water to 40 per cent of the city’s population. The water is extracted from deep aquifers and thus free from arsenic contamination. WASA is not concerned about the privately-dug tubewells, he says.

The problem is not confined to Chittagong town. Groundwater in several other areas across the district are also tainted with the toxic heavy metal.

The government is, however, taking slow steps to overcome this problem and protect its people from arsenic poisoning.

On October 18, in association with non-profits Japan International Cooperation Agency (JICA) and Asia Arsenic Network, the government organised a seminar on Arsenic Mitigation under Model Building for Safe Water Supply Service by Local Government Institution Project. The seminar highlighted the increasing dependency and the sharp rise in shallow tubewell installations after 2005. Experts at the seminar also pointed out that about 50 per cent of these tubewells have not been even tested for any contamination and hence people are blindly pumping water from them. To avoid sourcing water from shallow aquifers, JICA announced US $500 million towards strengthening surface water supply in the country. Majority of the funds will go to the Karnaphuli Water Supply Project on the Karnaphuli river that passes through the city.

The government has meanwhile proposed installing deep tubewells and dugwells to extract water from the deep aquifer which is free of arsenic contamination. The Department of Public Health Engineering of Bangladesh has initiated workshops for capacity building and awareness generation among the local population about arsenic contamination and has even announced free health facilities to the affected people.

But all these efforts may not be enough. Over-extraction of groundwater would anyway increase the concentration of arsenic in the aquifer. Therefore, Matin says, rainwater harvesting is an important solution to the problem. Reuse and storage of rainwater for potable and non-potable purposes can also provide some relief, he adds.

“People do not realise the risk of consuming arsenic-contaminated water as its effects are not felt immediately,” says Palit, suggesting that the government should introduce the ill affects of arsenic in the course curricula of students in primary schools to create awareness amongst the masses. To start with, he adds, the government should flag all tubewells that pump arsenic-contaminated water.