The heavy metal can disrupt amino acid synthesis in the grain 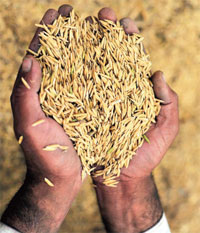 ARSENIC accumulation in rice is something that is largely unexplored. A study has now found that the heavy metal can disrupt amino acid synthesis in the grain, a staple diet for many. This can reduce the levels of essential and non-essential amino acids found mainly in rice which are essential for a healthy life.

Essential amino acids like lysine, phenylealanine, histidine and methionine not only improve digestion, stimulate hormonal release and enhance memory, they are also the building blocks of all proteins. Deficiency of glutamic acid, a non-essential amino acid, has been linked to Parkinson’s disease.

For the study, researchers from India and the UK analysed arsenic and amino acid contents in 16 rice genotypes grown in arsenic-contaminated soils in West Bengal. They chose three regions—Chinsurah in Hooghly district, Purbosthali in Bardhaman district and Birnagar in Nadia district. They found that the levels of arsenic in groundwater of the three sites were 17, 27 and 53 microgramme/litre (mg/l) respectively. The concentrations of arsenic in soil varied from 10.4 mg/l in Chinsurah to 12.6 mg/l in Purbosthali and 15.5 mg/l in Birnagar. The acceptable limit for arsenic in groundwater, according to WHO, is 50 mg/l and the permissible limit of soil arsenic as set by the European Union is 20 mg/kg soil.

They also found rice varieties that resisted arsenic accumulation in areas with high levels of the heavy metal in soil and vice-versa. The study will be published in the October 1 issue of Environment International.

The findings can act as a guide to identifying rice varieties suitable for growing so that the grain has minimum arsenic concentration and highest levels of required amino acids, says Rudro Deo Tripathi, scientist at National Botanical Research Institute.