Lack of research makes prosthetics too expensive for most Indians 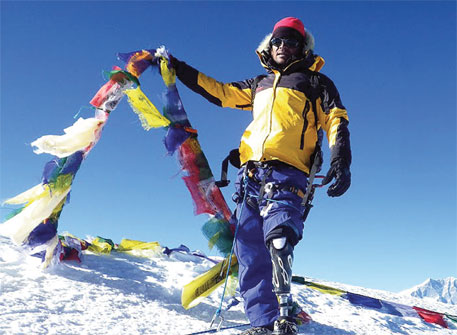 ASHOK Ramlal Munne, 29, came into limelight last year when he scaled the 6,470 metre-high Mera peak of the Himalayas in Nepal. He became the first person in India with a physical disability to achieve the feat—Munne had lost his right leg in a train accident in 2008. A resident of Nagpur, Maharashtra, he was a pro at martial arts and gymnastics prior to the accident. But even after losing his leg he didn’t give up his hobbies and continued cycling, swimming and running, among other things.

What came to his aid, apart from a strong will power, is an artificial leg made of carbon composite and titanium. Known as Freedom Foot, the artificial limb is manufactured by California-based company Freedom Innovations and costs Rs 5.5 lakh. It was donated to Munne by the International Society for Prosthetics and Orthotics. Most other disabled people in India are, however, not as lucky in accessing technologically advanced prostheses. When it comes to prosthetics, research in India is minimal. A 2012 study by Institute of Rehabilitation Sciences at the Indian Spinal Injuries Centre in Delhi, shows only 0.5 per cent of global prosthetics research is done in the country. China leads in this field followed by Germany and the US. Even a small and developing country like Thailand has a higher contribution than India. Most prosthetists blame lackadaisical attitude of the government for this.

Bhagwan Mahaveer Viklang Sahayata Samiti (BMVSS), which popularised the Jaipur Foot, and the government-run Artificial Limbs Manufacturing Corporation of India (ALIMCO), are two premier institutes engaged in prosthetics research in the country. While BMVSS focusses on technologies that can be replicated on a mass-scale, ALIMCO stresses on developing sophisticated prostheses. Despite this, India lags behind other countries in the field of prosthetics.

According to census reports, after visual disability, movement disability has the highest incidence among all disabilities in the country. There are nearly 100 million physically disabled people in India and many others, like Munne, join the numbers every year. But all that the government provides for these 100 million people are 90 government hospitals with a dedicated prosthetics unit.

International Society for Prosthetics and Orthotics organised its 14th World Congress in Hyderabad in the first week of February to help improve the condition of prosthetic research. This is the first time it has been organised in India. “It not only brought Indian prosthetists in touch with experts from abroad, but also provided a platform for Indian manufacturers to learn and start production of some material indigenously,” says B D Athani, who is the chairperson of the India task force of the congress.

Across the globe, new developments in the field of prosthetics are bringing artificial limbs closer to natural ones. “Development of smart materials, coatings and bio-compatible properties are necessary to make the patient feel comfortable and make full use of the bio-mechanic device,” says Anjani Kumar Sinha, assistant professor at the Institute of Rehabilitation Sciences, in Delhi.

Lately, very light yet sturdy composite materials are being used in prosthetics since they require less energy during walking, running and other activities. “Composite materials, formed by a combination of different materials, are a new class of synthetic bio-materials. An important development has been the usage of carbon-fibre reinforced polymer-matrix in composite limbs,” says Ranjeet Kumar, who is pursuing a PhD on material and technology in artificial limbs at the Indian Institute of Technology, Delhi. He says polymer-matrix includes substances like polysulfone and polyetherketones, that make artificial limbs lighter. They also greatly reduce sores and abrasions, a frequent occurring with the earlier heavy prostheses.

Use of computer technology is making these materials even more beneficial. “The latest are modular components. The advantage with them is that they are light in weight and can be moulded according to the needs of individual patients,” says Pal. “Technology like computer-aided design/computer-aided manufacturing, which we have in Safdarjung, has led to precision in developing artificial limbs. After a prosthetic expert has fed details of an amputee in the computerised system, the machine produces the basic artificial limb itself,” he says.

Another landmark innovation is the micro-processors. These are electronic chips which when fitted on the skin can analyse signals from the muscles and help patients move limbs and fingers. Below-knee and below-elbow amputations are easier to be fitted with close-to-natural limbs. Above-knee and above-elbow amputations do not achieve such efficiency due to the presence of a joint where sockets have to be put. Microprocessors have been a boon in such cases.

Absence of indigenous research reflects in the prosthetics manufactured in our country. Carbon composites and titanium are still a far cry and archaic materials like stainless steel and aluminium alloys are still in use. Japan invented the first microprocessor in 1982 but the research has not even started in our country. Imported chips are costly and within the reach of only the rich.

Past examples have shown local manufacturing can bring down the costs substantially. A single-axis artificial limb used to cost Rs 13,000 when it was imported. When ALIMCO started manufacturing it the cost came down to Rs 1,900. For progress in this field the government needs not only to fund research but also bring engineers and prosthetists together to create quality work, say experts.

Indigenous research is needed for another important reason: to develop prostheses that suit Indian needs. Western and Indian cultural differences come in the way of importing technology and material as it is. “The Indian commode is different than the western commode and requires squatting. In solid ankle, cushion heel foot, which is the basic western design, squatting is not possible. Religious practices of Hindus and Muslims also need them to kneel. Again western design fails to be efficient in such movements,” says D R Mehta, founder and chief patron of BMVSS.

Experiments like Jaipur Foot can help. The organisation is known not only for cheap artificial limbs based on simpler technologies but also for designs more suited to Indian and south Asian conditions. It allows movements necessary while squatting and walking on uneven surfaces. The artificial foot costs less than Rs 1,000 and can be prepared within two to three days. Sophisticated limbs, on the other hand, are costlier and need 30 days of initial medical and clinical care.

Safdarjung hospital’s prosthetics and orthotics department has also been able to provide low cost prostheses to its patients. The department sources a relatively cheaper material and uses its own laboratory to prepare artificial limbs, thus bringing down the cost of prosthetics substantially. “What will cost Rs 9,000 in the market, we provide within Rs 2,000-3,000,” says Sohan Pal.