As good as embryonic stem cells 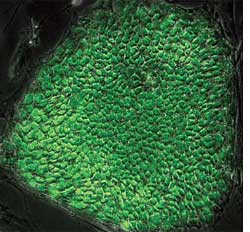 However, the process required using viruses which integrate with the human genome and bring about the conversion. The viruses can also switch on cancer-causing genes. The lifting of the ban comes at a time when this problem has nearly been solved.

A team led by Andreas Nagy, at the Mount Sinai Hospital, Toronto, Canada, discovered a virus-free way to make adult cells age backward to act as embryonic stem cells. This research might have great potential in the treatment of diseases like Parkinson's and Alzheimer's that have no cure.

The team used a transposon or a jumping gene called Piggybac (Pb). This is a sequence of dna which can shift from one position to another within the genome of a cell. This naked dna is put into the cell where it temporarily attaches to the cell genome, and switches on crucial genes. These genes make the cell age backward and go from a specialized, mature cell to cells similar in function to embryonic stem cells. Once this is done, Piggybac can be removed from the cell.

"Developing methods to reprogramme cells in which the viral insertions can be removed would get rid of the permanency of the cancer causing gene," said Leonard Zon, a researcher with the Harvard Stem Cell Institute, Boston, US.

However, th e technique is still in its infancy. While it has been tested successfully in mice cells, the research, confessed the team, has not been very successful in human cells.

The spokesperson from the stem cell taskforce of the National Institutes of Health, US, cautioned, "insertion of the reprogramming factors is random and might temporarily interfere with an important gene. Part of the carrier dna is often left behind even after removal. Jumping genes are also known to cause diseases like muscular dystrophy and haemophilia." However, she added, "cells generated by this method are a valuable research tool and provide useful means to screen drugs and establish human disease models in culture."

The method should be useful for stem-cell researchers in India where the investment in stem cell research is estimated to reach US $540 million by 2015. The Indian Council for Medical Research guidelines for stem cell research prohibit any research on embryonic stem cells but allow studies to be conducted on adult stem cells.

In India, research is on at the National Centre for Cell Sciences, Pune, the Indian Institute of Sciences, Bengaluru and the All India Institute for Medical Sciences, New Delhi.