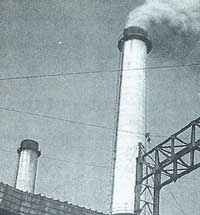 INDIAN thermal power stations consume about 150 million tonnes of coal each year, generating some 50 million tonnes of highly-polluting fly ash. Particles of fly ash suspended in the atmosphere carry small amounts of toxic lead, arsenic and mercury. Fly ash from Delhi's 2 thermal power stations at Indraprastha and Badarpur is among the Capital's major contaminants. Now, to check fly ash pollution, D K Sharma of the Indian Institute of Technology, Delhi, has devised a process that addresses the source of the problem -- coal.

Sharma's process, organosolvo-refining, removes most impurities that contribute to fly ash generation from low-grade coal. The technique -- which has a patent pending -- uses inexpensive, coal-derived, organic solvents like quinoline, anthracene oil and liquid paraffin to purify the coal.

Indian coals have up to 50 per cent of mineral matter like metallic oxides and silicates, responsible for the vast quantities of fly ash produced when the coals are burnt. With declining oil reserves, experts expect the country's dependence on coal to increase; they reckon that fly ash generation is likely to rise to 85 million tonnes by the end of the century.
Sharma says that the combustion of low quality coal also reduces the efficiency of thermal power plants. Moreover, the quality of the coal leads to easy corrosion of boiler tubes, heaters and fans.

To refine low-grade coal, it must be powdered and the impurities separated on the basis of their specific gravity, a process known as gravitational separation. However, this method does not remove the more firmly-bound mineral matter, and some amount of good-grade coal is also lost. Several chemical cleaning processes are being developed elsewhere in the country, but these require corrosive chemicals such as inorganic acids and alkalies, which damage the reactors.

His technique involves the stepwise extraction of the good coal using the solvents successively. The solvents trickle through a coal bed, extracting (dissolving?) the good coal. The successive use of different solvents, he says, speeds up the cleaning process. He has fabricated a laboratory-scale set up with a vertical tubular glass extractor that can hold about 500 grams of coal.

Sharma tested the efficiency of his technique with coal samples collected from Delhi's 2 thermal power stations, containing respectively 28 and 32 per cent of mineral matter. The successive extractions of these coals using anthracene oil and liquid paraffin over a 2-hour period yielded over 35 per cent of the premium coal called super-clean coal (Does the remaining 65% go waste?). This coal, which is high-energy and produces almost no ash, was recovered from the extract by distilling off the solvent.

The super-clean coal obtained thus, says Sharma, would make a good boiler fuel in industries, and can also be chemically converted into oil (WHICH OIL) by a process known as hydrocracking. This may be directly used as fuel in modified diesel engines (some tests have already been carried out at IIT).

Sharma claims that the reject or residual coal, high in ash, can also be used in other processes like coal gasification which involves the combustion of coal to produce coal gas; or it could simply be burnt at the pit head and the ash could be used to fill up abandoned coal mines.

Sharma hopes to transfer this technology to the coal industries which, he claims, can benefit -- provided they are willing to make some initial investment. Says Sharma, "The design of this process is simple and does not involve the use of costly material for construction and the solvents can be recovered and recycled without any significant loss." However, he admits that he has yet to work out the technoeconomics of scaling up this process from the lab to the industry.