With growing pollution and staggering waste levels, the world's largest continent is fast emerging as the most lucrative hunting ground for firms hawking clean-up technologies 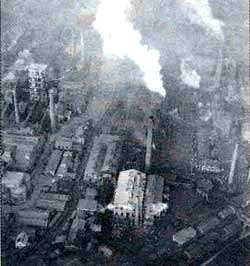 FOR international environmental technology firms, Asia's colossal environmental problems are a business paradise. The darker side of growing economic prosperity and a burgeoning population are the major invites. Plummeting air quality is just one indicator that Asia has much cleaning up to do. According to the World Health Organisation, 12 of the 15 cities with the highest level of "airborne particulate matter" are in Asia, while the Washington-based Population Crisis Committee ranks 5 cities in Asia among 7 others with the world's worst air quality.

Waste Management International, a subsidiary of the us-based wmx Technologies, predict profitable business in Asia. Although in 1993 Asia accounted for only about 10 per cent of its WMX's us$ 1.5 billion revenues as against 80 per cent for Europe, the company's top brass is convinced that Asia and Europe will contribute equally to its turnover by this decade-end.

There are other optimistic visions about a us$ 31 billion market for environmental technologies and services in Asia. The Kenan Institute of Private Enterprise, affiliated to the University of North Carolina, predicts that in Thailand alone, the market may touch us$ 10 billion over the next decade. Increasing environmental consciousness is expected to spur on an industry growing at a rate of 16 to 20 per cent annually.

However, it may not be all hunky-dory for the firms. Often their efficiency is blocked by weak environmental legislations and enforcement measures. Waste Management has been facing stumbling blocks in Asia due to lax environmental regulation enforcements. There is also public resistance to hazardous and toxic waste treatment units. Mingsarn Kaosa-ard, director of the Natural Resources and Environment Programme at the Thailand Development Research Institute, observed in the Far Eastern Economic Review, "There has to be more communication with the public. We have passed the stage where governments can make all the decisions alone."

Much of Asia's toxic and solid waste often ends up in rivers or garbage dumps. The industrial sector's reluctance to fund clean-up technologies, and administration's unwillingness to blunt the industry's competitive edge by imposing additional costs on it, contributes to this. In Taiwan, plans to build waste-to-energy incinerators were put on the back burner because of government insistence on keeping waste treatment prices below market rates. For firms contemplating selling their "state-of-the-art facility" technology in Asia, this indicates a tough challenge.