High court derecognises their diploma; state yet to work out a plan to absorb them 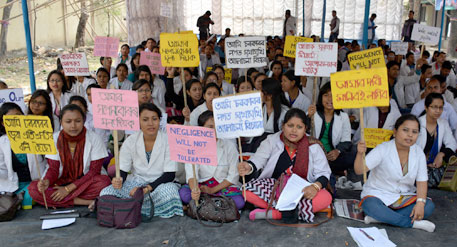 In mid-February, rural health practitioners of Assam sat on a three-day protest in Guwahati, demanding assured career and regular jobs. This follows a high court order, which has struck down the law under which they were trained and hired by the state health department to serve in rural areas.

Owing to the shortage of doctors in the rural areas in the state, the Assam legislature had enacted the Assam Rural Health Regulatory Authority Act, which came into effect in September 18, 2004. The law envisaged a diploma in rural health care and medicine.

However, a judgement of the Gauhati High Court, dated October 30, 2014, struck down the Act, terming it unconstitutional.

The judgement was given by a division bench, comprising Chief Justice (acting) K Shreedhar Rao and Justice Ujjal Bhuyan, on a petition filed by the Indian Medical Association (IMA), Assam chapter.

The protesters, under the aegis of Rural Health Practitioners’ Association (RHPA), said they have been left with no job prospects. “Three months have already passed since the judgement was delivered, and till now we are in complete darkness regarding our future. We want the Assam government to take steps to resolve this immediately,” said Sanjay Kumar Das, general secretary of RHPA.

The Assam government, meanwhile, has done little to implement the court’s directions—the Medical Institute of Jorhat, which was set up to provide the diploma course, is still operating. 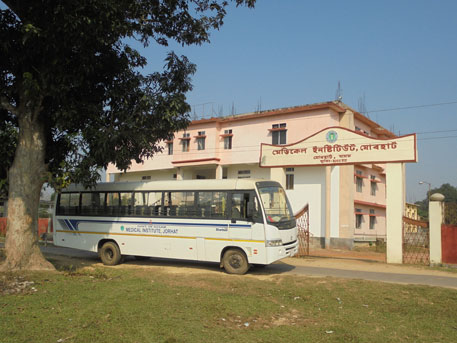 Speaking to Down to Earth, the institute’s principal, Adinath Sarmah, said he is aware of the court’s judgement, but added he has not received any instruction from the Assam government.
“I have not received anything in writing from the health department, and till then my job is to run the institute and teach the students,” said Sarmah.

According to data from the state health department, five batches have passed out from the institute till now; almost 1,000 persons have got this diploma and a huge number of them have been posted as rural health practitioners in different parts of the state.

Besides, over a 100 practitioners who have obtained their diploma, are waiting to be absorbed in the state health department.

Meanwhile, rural health practitioners who have passed out of the institute are still practising and this has invited the wrath of the Assam chapter of IMA.

Describing the indifference of the Assam government on the issue even after the court’s judgement as unfortunate, Goswami said that since the court has already struck down the Act and has termed it unconstitutional, it is a major offence if these rural health practitioners continue practising.

Goswami said that IMA had filed the case in 2005 and even then the state government went ahead with the course.

IMA has also said that it will file a case very soon against the Assam government, for not following the court’s directive.

The rural health practitioners said that the government has not issued any circular or instructions regarding them.

“We have not been conveyed anything in this regard by the government, and we have simply been told that the state government will take steps to rescue us from this situation,” said Debashis Sarou, a diploma holder.

On a little prodding, Sarou said that the government has assured that their diplomas will be converted into BSc degrees in community heath.

The Assam government, which has been caught on the back-foot following the judgement, is exploring ways to deal with the situation which includes converting the diplomas to degrees in community health by passing an ordinance.

“We are aware of the judgement of the Gauhati High court, and the department is working on it,” Manish Thakur, commissioner and secretary, health and family welfare of the Assam government, told Down to Earth.

“We are exploring all the possibilities, and one of those is passing an ordinance and converting the diplomas to BSc community health. Once that is done, all of them will be given jobs in the Assam health department,” said Nazrul Islam, Assam health and family welfare minister.

On being asked what will be their new job description after getting the degrees, the health minister said that they will do the same job for which they have been trained and what they were doing earlier.

Trouble ahead for Assam government

Though the Assam health minister has managed to avert the wrath of the diploma holders and the rural health practitioners by assuring them that they will soon be getting the same job for which they have been trained and were posted earlier, the IMA has warned that such a move will force them to move court.

Though IMA has welcomed the move to rehabilitate the diploma holders, the association has made it clear that it will oppose tooth and nail if they are allowed to practice on patients.
“If after the passing the ordinance and converting their diplomas to BSc degrees, they are allowed to prescribe and practice on patients, we will not sit silent and will fight on the issue again,” said Goswami.

On being asked what is the way out, Goswami said there is a need of people specialising in paramedical subjects and if the Assam government engages them as paramedics under the health department, then it is a welcome move.

Rural health practitioners have, however, made it clear they will not agree to being made paramedics and will not settle for anything less than what they have been trained during the diploma and during their posting over the years.

“Will someone who has been a teacher at a school for five years accept a security person’s job after that? In the same way, we will not accept if we are posted as paramedics now,” said Das.
Assam’s health minister refused to comment on IMA’s demands.

The minister said that a possibility which is being discussed in the department is regarding providing these diploma holders a lateral entry into the MBBS course in the medical colleges in the state.

Former Assam health minister Himanta Biswa Sarma, during whose tenure the first batch of rural health practitioners got their posting, however, said that Assam needs them.

Bachelor of Rural Health Care: Do we need another cadre of health practitioners for rural areas?