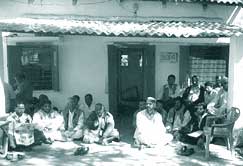 the atmosphere in Orissa is rife with tension and resentment over the setting up of an alumina refinery plant near Bagrijhola village in Kashipur block, Rayagada district. The Naveen Patnaik government is in a hurry to make the Rs 4,000 crore project, of Utkal Alumina International Limited (uail), operational. This has brought the 12-year-old community resistance against the project to the forefront. On December 16, 2004, nearly 10,000 villagers, mostly tribals, vowed to intensify their protest against the project. It was the fourth death anniversary of the three tribals killed in police firing in Kashipur while protesting bauxite-mining activities in the area.

Legislators and activists opposing the project allege that the government acted hand in glove with uail to prevent them from attending protest meetings organised by residents of 24 villages on December 16, 2004. They say some of them were detained at a police station and attacked by goons later .

The Kashipur case is just one of a long list of industrialisation attempts opposed by the state's tribal population. The government has already signed memoranda of understanding for 29 big projects and is actively considering proposals for nearly 50 more. It doesn't seem deterred by the recent High Court (hc) order that indicted it in the Tangarpada chromite mining case. The hc quashed the government's deal with a private company and ordered a fresh tender for the project. The government has said it will move the Supreme Court. It also appears unmoved by the opposition's demand for the chief minister's resignation following the hc verdict.

The Kashipur area has one of the richest deposits of bauxite, the principal raw material used in the aluminium industry, in India. The state government entered into a contract with the uail for bauxite mining in the area in 1993. uail today is a consortium of the Canadian company alcan and India's Hindalco Industries of the Aditya Birla Group. Norway's Norsk Hydro and India's Tata Industries Limited were earlier part of the project, but pulled out subsequently, citing different reasons. The venture is 100 per cent export oriented.

The Paroja and Kondha, two tribal groups in the area, have been under constant pressure to vacate their land for the project. Initially they made several representations before the administration in vain. Helped by organisations like Prakrutik Sampada Surakhya Parishad (pssp), Baphilimali Surakhya Samiti and Anchalik Surakhya Samiti, they started organising themselves in 1993. The flash point came on December 16, 2000, when three tribals were killed in police firing at a protest rally near Maikanch village. Fearing an uprising, the then state government asked the uail to seek the consent of the tribals for the project.

The pssp says the project will displace nearly 60,000 people, destroying their livelihoods and endangering their health. But the uail and the government say only three villages, comprising 148 households, will be affected. A study by Taru, a Delhi-based non-governmental organisation, says that mud generated during mining exploration and alumina refining could severely silt up the Indravati river. Besides, the plant will require nearly 1,000 hectares of cultivable land. Another estimate says if the forest cover is lost, more than 500 streams in the region will vanish.

The rising price of aluminium in the international market is believed to have prompted uail to pressure the government for expediting work on the project. There is a huge profit margin in alumina trade. While the cost of production of one tonne of alumina is between us $100 to us$120, it fetches a price of us $ 250 to us $325 in the market; a profit of us $150 to us $200 per tonne. Another reason why Orissa has become a hunting ground for alumina manufacturers is that the state government has not fixed any price for the mineral. It takes a meagre royalty of Rs 64 per tonne of the bauxite mined.

For some reason, despite no great economic benefit, the government wants the project going at any cost. Non-bailable warrants have been issued against more than 200 tribals and 32 community leaders. The local police is allegedly misusing these to force the tribals to concede to the project. hc lawyer Bibhu Prasad Tripathy says, "The district administration is flouting the fifth schedule of the Constitution, the provisions of the Panchayat Extension to Schedule Area Act, 1986, and the sc and st (Prevention of Atrocities) Act to get consent from gram sabhas." Patnaik has asked district magistrates to take all possible steps to speed up work on the project. At a recent collectors' conference, he warned that no dissent against industrialisation will be tolerated. Lingaraj, a tribal, responds: "Our resistance has been peaceful for 12 years, but it can turn violent.