It might be possible, requires triggering the muscle stem cells 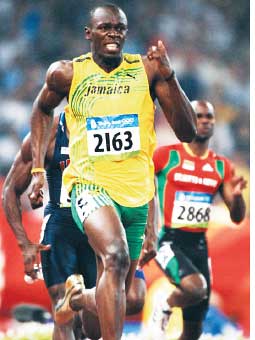 as humans age, muscle cells ability to renew and repair is severely impaired. Much as a woman loses her ability to bear children after menopause, ageing stem cells that give rise to various tissues in human bodies cannot reproduce. Muscle cells are no exception.

They asked 20-year-old and 70-year-old volunteers to wear a cast on their leg for a week to allow the muscles to weaken. The cast was removed thereafter and the subjects had to exercise vigorously.This sudden increase in physical activity demanded a quick regeneration of the muscles. The researchers then examined the working of muscle tissue at the molecular level.

In muscle stem cells, extremely specific chemical messengers interact as though they are in an assembly line, each delivering a fine-tuned message to get the stem cells to regenerate damaged muscles. There is a deliveryman named Delta. He carries a message to Notch, a midwife living on a busy street. With age, Delta shows up rarely at Notchs doorstep. And since Notch does not get the message, she does not mediate birth as often as she used to. At the same time, Notchs personal messenger system through which she communicates with her clientsthe stem cellsalso gets blocked. The culprits are two protein spammers tgf-? and pSmad. End result: muscle cells cannot repair themselves as humans age. It is the imbalance in the levels of key chemical regulatorsDelta, Notch, tgf-?, pSmadand not any intrinsic change in the cells.

Every organ has stem cells with the potential to regenerate in the right environment. Understanding how to trigger stem cells in old age has important life-extension possibilitiesboth from the perspective of increasing disease-free survival in humans and life expectancy, said Carlson. The study was reported in EMBO Molecular Medicine on September 30.