Atlantic cooling may be temporary respite 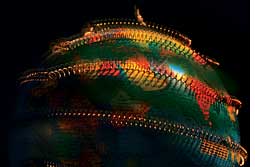 even though the earth is heating up there could be some relief, say recent studies. And we have to thank the Atlantic Ocean for this respite. Researchers at Leibniz Institute of Marine Sciences, Kiel, Germany, who studied the Atlantic say the oceans natural phenomenon could slow down global warming. The ocean goes through warm and cool phases, weakening future global warming trends by about 30 per cent of the prediction of the Intergovernmental Panel on Climate Changes (ipcc) fourth assessment report presented last year. That does not mean, warn the researchers, no more belt-tightening is required on greenhouse (ghg) emissions.

ipcc predicted a 0.3C rise in global temperature between 2005 and 2015. The prediction was based on ghg emissions due to anthropogenic activities. But models it used did not factor in natural phenomena, temperature variation in the Atlantic for instance.

The Leibniz research shows how temperature variations in the ocean have impacted temperatures in the Northern Hemisphere. Temperatures in the region have gone up by 0.6C from the 1970s to 2005, of which, 0.2C was because of temperature variations of the Atlantic ocean. Our finding also shows the warm cycle has peaked suggesting the effect may become less pronounced by 2015, says Vladimir Semenov, a researcher with the institute. The findings of the study were presented at the assembly of the European Geosciences Union in Vienna, Austria, in mid-April. A related study that took note of surface temperatures of the Atlantic also says that the ocean is experiencing a cooling effect and will continue to do so until 2015, which may bring down the global temperature. They also studied climate variations in the tropical Pacific ocean, which they say will remain unchanged, and not add to global temperatures.

We predict that natural climate variations in the north Atlantic and tropical Pacific may offset human induced global warming in the short-term, says Noel Keenlyside, also of the marine sciences institute, and the lead author of the paper, published in the May 1 issue of Nature.


Global warming is for real. We all know that. The ipcc report has clearly shown that temperatures will continue to rise because of both ghgs in the atmosphere and continuing emissions. The study under discussion doesnt dispute that. It brings to light fluctuations caused due to the natural climate variability like the one seen in the Atlantic, says Gabriele Hegerl, associate research professor at Duke University, us.

There is concern that such predictions could lead to easing up of pressure to reduce human activities that contribute to global warming. That is certain to take the edge off countries negotiating the Kyoto Protocol post 2012the year the first phase of the agreement expires. This is a problem but I hope work such as ours and others clarify to policy makers that natural variations may only temporarily mask the impacts of global warming in the short term, says Keenlyside.

Johann Jungclaus of the Max Planck Institute for Meteorology, Hamburg, Germany, and a co-author, advises caution. Some countries may use this study as an argument against steps to reduce ghg emissions. But the damage to the fight against global warming would be much bigger if short-time reversals would happen and we dont have an explanation for them.