WTO ruling on EU-US spat over GM could impact South 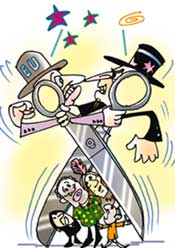 the World Trade Organization's (wto's) ruling that the European Union (eu) was not justified in blocking imports of genetically modified (gm) crops has created major problems for the international community. A panel set up under the dispute settlement mechanism of the organisation has sided with Canada, Argentina and the us. It has declared that a ban on import of biotech seeds from companies such as Monsanto without "adequate scientific evidence" of their harm is illegal under the trade body's regulations.

While the eu officials maintain that the ruling will not influence their regulations, it's bound to have far-reaching consequences for, or at least have some influence on, the gm policy and trade of countries ranging from India to Japan and Russia. These countries have regulations stipulating labelling and tracing of goods containing biotech ingredients.

The ruling was in response to cases filed by Canada, Argentina and the us in 2003 at wto, after protracted negotiations with the eu . The countries asserted that the eu had violated international trade rules by imposing a moratorium on gm crops between 1998 and 2003. They argued that the eu's logic for the ban was contrary to scientific advice that gm crops posed no health or safety risk. They complained that the eu had set no deadline to lift the moratorium. The three countries also objected to the individual bans imposed by Austria, France, Germany, Greece, and Luxembourg on gm crops that had secured approval of the European Food Safety Agency (efsa). The bans were imposed on a temporary basis using a so-called 'national safeguard clause' that the eu member states can invoke when they have doubts about the products' safety for human health or the environment.

The eu' s stance is that its 2004 regulations on import of gm crops and seeds are in tune with wto rules, which insist upon "adequate scientific evidence" for rejection of an import and a shorter timeframe for the approval process. European officials point out that the moratorium had been lifted in 2004, and that since then the European Commission had licensed more than 30 gm crops. But the us claims that the eu has a backlog of approving about 20 types of gm corn, cotton and soyabean.

Critics reacting to the order, which will now be sent to the parties for further deliberations before wto gives a final verdict by 2007, say that it is bound to scare 'lesser' countries which lack the scientific capacity to defend their bans, if and when they decide to place them. India is a case in point. Statements from Michelle Gorman, the director of regulatory relations at the us Farm Bureau Federation in Washington confirm this fear. The director stated that one of the main reasons to register the case was to prevent loss of other markets that are important for us agriculture exports.