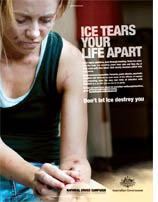 The Australian government's advisory group on drugs has defended a graphic new television campaign about the drug crystal methamphetamine or ice. It shows an office worker unable to sleep after smoking the drug; a man flying into a psychotic rage in a hospital and smashing a window; a young woman compulsively picking at her skin because she thinks there are bugs under there and a young man fighting with his mother under the influence of the drug.

Australian National Council on Drugs chairperson John Herron says it shows the reality of the drug. But there are also questions about whether ice should be the priority for the 'war on drugs' and whether this new campaign is the right tactic. The head of the Youth Substance Abuse Service in Victoria, David Murray, for example, believes alcohol is still the biggest problem in Australia and should be treated accordingly. Murray says while the number of people coming to the service with amphetamines problems has remained relatively constant over the last five years, the number of those with alcohol problems has doubled.