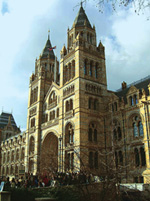 Australian aboriginal leaders have sued London's Natural History Museum (nhm) for its decision to carry out dna tests on bones, teeth and skulls taken from the island's Aboriginals. The museum has agreed to return the 19th century specimens to Australia after tests are complete. Museum authorities argue that the tests will help the study of human evolution.

The Tasmanian Aboriginal Centre (tac), which is bringing the legal action in the London High Court, complains that the tests will desecrate the beliefs of its community. The dead are said to be "souls in torment" until properly buried, according to Aboriginal custom. "They would never dare to do these experiments to the human remains of Jews or Roma or Scots or Manx Islanders," Michael Mansell of tac said. "That they intend to mutilate our ancestors without our consent shows that they have not lost the same primitive mindset of the first English settlers, who treated our people as sub-humans."

nhm said in a statement: "The data collected from the Tasmanian remains is of significance to the global scientific community as the once isolated nature of the Aboriginal population of Tasmania makes the collection irreplaceable for research."

The remains were collected by George Augustus Robinson who had been contracted by the colonial government of the day to clear lands by force for European settlers. After his death, they changed hands several times, eventually landing up in nhm's custody.