Autumn of a patriarch 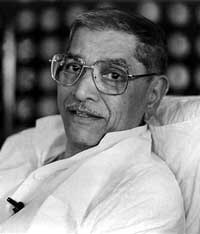 on december 10 , 2000, about one million people gathered on the banks of the Narmada, near Shukalteerath in Bharuch, Gujarat, to express gratitude towards the man who changed their lives, Pandurang Shastri Athavale, or Dada (elder brother), as he is fondly called, who turned 80.

Athavale founded the social movement called Swadhyay (which literally means self realisation) and was awarded the Magsaysay for this. He has been instrumental in introducing a realistic social change in India's rural communities and believes that selfless service, without expecting returns, is the mantra that can bring humanity together.

Preparations were in true Swadhyay style. No government help was taken -- from a 120-boat bridge across the river, to nearly 4,000 women serving water at the venue, to those guiding the traffic on the last 60 km of the highway from Baroda to Bharuch, to computerised parking with colour codes.

The highway was an example in self-discipline. Truckloads of people moved towards the main venue but there was no traffic jam or chaos. B J Dewan, retired chief justice of Gujarat high court, said, "I wouldn't have missed this for anything. I know Dada since I first met him in 1959, and his words still echo in my ears: "I don't try to mould anyone or sculpt them. I just see how a person can be used, each individual's capacity and capability." That is the crux of his mantra, making best use of human power to effect a change."

An uncanny silence enveloped the audience as they waited patiently for Athavale to make an appearance on a stage with eight columns -- symbolising eight eventful decades of his life. "Dada is synonymous with slogans such as c hhor ma ranchod (Krishna is within a plant). Not only has he brought about a revolution of sorts, touching every aspect of life, but has given the most valuable gift of all to those who care to hear him out: self-esteem," said one member.

Jayshreeben Talvalkar, who is Athavale's foster daughter and now the guiding force of the movement, made the opening remarks. A hushed silence descended on the crowd as Dada began to speak. "I've never cried in my life and neither have I made anyone cry. But today seeing what the youth has done, I just cannot hold back my tears."