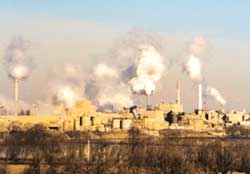 The us Senate Environment Committee rejected the Bush administration's controversial Clear Skies bill on March 9, 2005. The bill imposes cuts on emissions of mercury, sulphur dioxide and nitrogen oxides from the country's coal-fired power plants. But environmentalists point out that it ignores the more urgent need of cuts in the emission of greenhouse gases like carbon dioxide that cause global warming. They also allege that it gives utilities too much time to install costly pollution-reduction equipment.

The committee voted 9-9: Democrats, Rhode Island Republican Lincoln Chafee and independent Jim Jeffords voted against the bill. But president George W Bush expressed confidence that the Congress will be able to salvage it. The bill "uses the power of free markets to reduce power plant pollution by 70 per cent without disrupting the energy supply or raising electricity prices," he reportedly said.

The Bush administration also has other means to fulfil its end. On March 15, 2005, the us Environmental Protection Agency issued rules for mercury emission cuts by coal-fired power plants. Environmentalists oppose the move, saying the epa's cap-and-trade system is pro-industry; utilities don't need to do anything specific to control mercury emission till 2010.