Baby fat is out 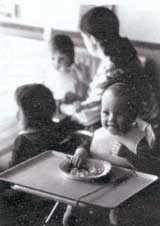 WITH babies vying with each other in bornny baby contests the world over, baby fat has never been a serious issue with mothers and paediatricians. A chubby baby is considered a healthy baby by all. Some Finnish researchers, however, decided to have a fresh look at the dietary requirements of babies, particularly the fat content in their diet and its implications. The study concludes that, contrary to conventional belief, it may not be all that good to feed babies with fat-rich food (Archives of Paediatrics &Adolescent Medicine, Vol 15 1, No 2).

While there are guidelines issued by various bodies like the American Heart Association (AHA) about the composition of diets for adults and children (including babies), hardly any such specific recommendations exist in the developing countries. This is especially true of urban populations in developing countries like China, where obesity in children is fast emerging as a serious problem. In India, medical bodies like the Indian Council of Medical Research have made recommendations pertaining to the dietary needs of children. However, a significant number of people are either not aware or just not concerned.

The AHA recommends that children over two,years should restrict their daily fat intake to roughly 30 per cent of the calories consumed, as it would otherwise become a risk factor for heart disease in later years. But the AHA also says that reducing the level of fat in the diet to less than 30 per cent could be dangerous. The presence of fatty acids in the diet have an important role to play in the development of the brain, which grows at a rapid rate during the first two years. The brain of a two- year-old reaches 80 per cent of the volume it will attain by adulthood, half of which comprises fat. Large amounts of fat are thus needed for the overall physical and mental development of growing children.

A team of researchers led by Hanna Lagstrom of the University of Turku in Finland followed two groups of children between the age of eight months and four years. The first group had 540 children whose parents agreed to regulate the level of fat and cholesterol in the children's diet, while 522 in the second group were given a normal diet with 30 per cent fat. The objective was to study the impact of a slight reduction of saturated fat, a variety that is linked to heart disease.

The scientists replaced saturated fat with monounsaturated and polyunsaturated fats (like vegetable oil or margarine) to provide the babies with adequate levels of fat for brain development and overall growth. They studied the effects of a diet low in saturated fat and cholesterol on infants as young as 13 months. The researchers took a bold step: they advised parents to feed skimmed milk or tinned formula food as soon as the babies were weaned. This was a radical departure from the recommendation of paediatricians that babies under two years be given whole- some milk.

According to their analysis, the amount of fat normally consumed by babies after weaning in Western society is far less than the amount presumed by nutritionists for analysis, suggesting that babies might not need as much as 30 per cent fat in their diets.

Significantly, the two-year-olds examined in the trial did not show any ill effects despite being on a diet with only about 11 per cent of their calories from saturated fat, as compared to 14 per cent in the control group. They evaluated the children's neurological and psychological development extensively at the age of five years. Preliminary analysis has shown no significant difference between babies given less fat and those who had the full quota of fat in their diet. The study suggests that the present guidelines on the diet of babies are outmoded.

This is considered the first long- term prospective study to examine the safety of a restricted diet in infants under two years and has placed nutritionists and paediatricians in a dilemma. Their response to the study has been cautious.

Some nutritionists, however, admit that the study is promising and can play an important role in providing healthy diet recommendations to younger children. Edward Fisher, director of cardiovascular research at Mount Sinai School of Medicine, New York, was part of the group that made these recommendations earlier. Fisher says that it has long been assumed that breast-fed and hottle-fed babies take in much more than 30 per cent fat in their diet even after they start consuming other foods, as both breast and formula milk contain high quantities of fat. But the Finnish study points out that the average eight- month-old baby gets only about 29 per cent of its calories from fat.

Several researchers in the US are, however, seeking more clinical data on the effects of reduced fat intake. According to them, a blanket recommendation can pose new problems. In the absence of expert advice to parents, young children may actually get far lower quantities of fat than the essential requirement. There are instances of children reporting signs of malnutrition when kept off fat-rich diets by over-cautious parents. In addition, most kids are quite fussy in eating. Wholesome milk, they argue, is the surest way of ensuring the intake of the required fat content.