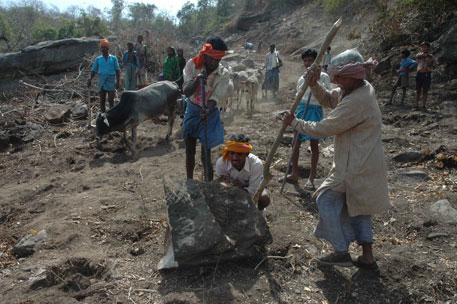 In two villages of Bihar's Kaimur district wedding bells have not rung for the past 35 years. Parents of prospective brides reject marriage proposals from the twin villages, Barwan Kala and Barwan Khurd, situated on top of Kaimur hills, because there was no road connectivity. A visitor had to trek for about four hours to reach the hill top—a daunting task for parents of any girl looking for grooms.

In the 2005 Assembly elections, Ramchandra Yadav, the Bahujan Samaj Party (BSP) candidate promised to change the fate of the twin villages. He promised the bachelors that if they vote for him, he would construct a road that would help them get beautiful brides.

Rajgrih Singh, 45, recalls that when people heard the promise scenes from Indian mythology, Ramayana, seemed to come alive. Residents started looking at Yadav as Lord Rama, and the bachelors started considering themselves as monkey god, Hanuman, whose duty it was to help Rama in time of distress.

“We thought that our days of celibacy are over and we will work to ensure victory of our candidate,” Singh says.

Yadav won the election after people in the two villages campaigned for him day and night. The residents were jubilant that soon a road would be constructed and wedding feasts would become an annual affair.

But Yadav soon forgot his promise and the residents of the twin villages were incensed. They vowed that they will construct an 8 km road on their own to get brides. When they started the work, the forest department tried to stop it, saying construction of roads in forest area is illegal. The department lodged criminal cases against 12 village youths.

The bachelors, some of them septuagenarians, however, decided to break the law and continued to construct the road. Last year, they completed the road and early this year.

Jubilant bachelors of the village were busy spreading the word that their village now has a road to attract brides and their families. But a bride is yet to tread the road to the village.

When the 2014 parliamentary elections were announced, residents of the two villages expected government vehicles and candidates to arrive. After all they had built a road.
But no one came to the village. Instead, they received an official letter.

A public meeting was called and a letter of protest drafted. In the letter faxed to district magistrate and Election Commission of India, the residents stated that they plan to boycott the elections because the polling booth has been shifted.

Ram Dayal Singh, a former village head, says that shifting of polling centre has further ruined the chances of bachelors of the two villages finding brides. “Word will spread that the route to the villages is so heavily Naxalite-affected that even the polling booth has been shifted,” Singh said.

Yadav says people are furious over the shifting of the polling centre because they think that their years of hard work has been in vain. “They feel insulted and angry that the twin villages would get defamed as Naxalite-affected, adversely affecting chances of marriage for eligible bachelors,” he adds.

The twin villages had two polling stations in the lone government building in the area—a middle school. At polling station number 277, there are 971 voters and booth number 279 has a list of 418 voters.

Yadav is baffled by the election boycott. “As a government employee I can’t support the boycott but deep in my heart I support the decision of the people,” he says.
To vote or marry?

ASP Yadav has promised people that they would not have to walk 8 km to the polling booth under the scorching sun. A tractor has been arranged for the election day—April 10 to ferry the residents.

But the residents are far from mollified. “With every inch the tractor moves, our chance of marriage will get slimmer,” claims Ram Dayal Singh.

Once the tractor reaches the polling centre, voters from other villages would form an opinion that Barwan Kala and Barwan Khurd have been ignored even by the government.

On election day, the residents would have a tough time deciding whether to choose a political representative or not vote to brighten their chance of finding brides.