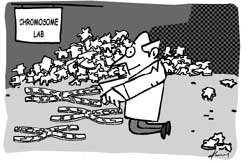 in 2001, a great deal of publicity was generated by the announcement of the human genome being deciphered. Those who followed the announcement closely noticed that the claim was somewhat premature, as what had been accomplished was just a draft of the genome sequence. In other words, more than a few loose ends needed to be tidied up. A step in that tidying up process has taken place now. The Human Genome Sequencing Consortium led by the Sanger Institute near Cambridge, the uk, has recently finished sequencing yet another human chromosome, number 20. This chromosome joins numbers 21 and 22 that were sequenced earlier. It is the largest chromosome yet to be unravelled. It constitutes some two per cent of the human genome, which comprises 23 pairs of chromosomes. The instructions (genes) the human body needs to function are packaged in these chromosomes.

The genes of the chromosome 20 vary enormously in size: the smallest is 339 bases in length while the largest is more than one million bases long. Secondly, at least 57 per cent of the chromosome seems to be incapable of coding for any protein at all, a finding that raises questions regarding the occurrence of dna sequences that are 'just there': Do they constitute 'junk' information? Do they perform functions of which we are yet unaware? Are their roles so subtle that detection might be a problem? Thirdly, some of the genes that have been identified seem to be up to interesting tricks: by cutting and splicing out bits of information, they are able to encode more than one protein. Another intriguing facet of the discovery is that in two out of every five people, the chromosome has an additional 'chunk' of dna containing at least one extra gene. Scientists have yet to discover the purpose, if any, of this extra genetic material. They also found that the chromosome contains 30,000 tiny 'point' mutations that are involved in genetically distinguishing one person from another.

Medical researchers are anticipating that the feat would lead to a better understanding of a range of illnesses associated with defects of the chromosome. Since genes play a significant role in causing hereditary diseases, sequencing the human genome could result in the early diagnosis of these diseases. It could, perhaps, also help in their treatment and cure. Diseases linked with chromosome 20 include Creutzfeld-Jakob disease (which leads to dementia and, eventually, death), a type of diabetes, cataract, eczema and a disease in which the immune system attacks its 'own' body. Now, with the deciphering of the chromosome, researchers are better equipped to tackle these diseases that afflict millions. "This high-quality sequence is like a finely tuned engine that will drive researchers towards medical benefits more rapidly and more smoothly," said Allan Bradley, director of the Sanger Institute. The information will be made freely available for scientists throughout the world. However, the process of going through the sequences is going to be a long one. Indeed, that may require as much investment in terms of time and effort as getting the sequences themselves did.