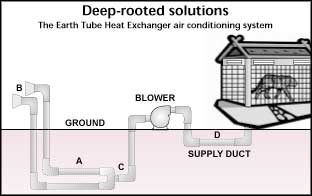 summers are round the corner and so is the scorching heat. Most dread the thought of it. But Mahesh, a 15-year-old white tiger of the Ahmedabad-based Kamala Nehru Zoological Garden, is all set to face the wrath of the Sun in grandeur. In 2000, his dwelling was ameliorated with the installation of the Earth Tube Heat Exchanger (ethe) -- an air conditioning device that permits transfer of heat from ambient air to deeper strata of soil and vice versa. Hence, thanks to ethe, Mahesh is a cool dude in summers and all cosy in winters.

The device is based on a well-known fact that while ambient air temperatures are subject to daily fluctuations, temperatures of soil beyond a depth of around two metres remain virtually constant. Deeper layers of soil can thus be used as good heat sinks during summers and as heat sources in winters.

The ethe system consists of an earth tube heat exchanger, a high-pressure blower, distribution ducts with baffles, grills, diffusers and a supply duct. Two parallel tubes (a, in box: Deep-rooted solutions) constitute the heart of the system. The tubes are buried near the floor of the place to be heated or cooled. Each tube is 30-m long and made of 20-cm diameter pipes. The inlets of the tubes (b) allow the air to be sucked in. Both the tubes are connected to a header (c), which in turn is connected to the suction end of the blower. A 30-cm diameter pipe (d) connected to the delivery end of the blower takes the conditioned air to the supply duct.
In winters, ethe can warm up ambient air by as much as 10c at night. In summers, the system can cool the air by 8-10c during the day. In many ways, ethe is much better than the conventionally used system -- it leads to conservation of water and electricity, as it uses no water and very less electricity.

Moreover, it is ecofriendly, can be installed anywhere and is cost-effective. It even avoids the problem of excessive humidity, which is not beneficial for both animals and human health. Furthermore, the system can be used for treating animals through the inhaling medication system. For instance, an eucalyptus oil gauge can be placed near the air inlet of ethe, through which the medicine can be spread to all animal dwellings connected to the system.

Because of its advantages, ethe is commonly being used in Europe and North America for greenhouses and buildings housing livestock. In these places, it is also being considered as a viable option for conventional air conditioning systems used in residential buildings.

Unfortunately, in India Mahesh is the only one benefiting from the novel device. The installation in his dwelling was the result of initiatives taken by the zoo authorities. Due to ethe's successful operation, they are now planning to extend the facility to other tiger dwellings.

Experts claim that such a system can be very helpful for improving the conditions of animal dwellings in the zoos, especially during the summer season. The animals are usually under considerable stress because of the heat. As a result of this, their food intake reduces. Attempts to cool the dwellings by hanging wet straw mats prove to be futile. Moreover, such efforts make the inside of the animal dwellings very humid, which in turn encourages the growth of bacteria and pathogens.

Along with the summer heat, the chilly cold nights of winters also take their toll on the zoo animals. Their mortality rate increases drastically during this season. In some zoos, electric heaters are used during exceptionally cold spells. But this is not considered very feasible as considerable amount of electricity is consumed.

According to experts, ethe can be a good solution to all such problems. If installed in zoos across the country, ethe would also immensely help in improving the plight of the caged animals. The ethe system can also tremendously help in curbing harm-ful emissions of conventional air conditioners.

The article was written in collaboration with the researchers from the Centre for Environment Education, Ahmedabad