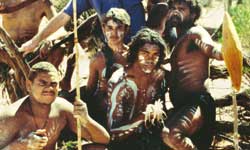 Twenty-five protesters from the London uk- based Survival International were bundled out of the Oxford University's union office by for "asking offensive questions" to Botswana's President, Festus Mogae. Mogae had been invited to give a promotional talk about the state of democracy in his country, but was met at every turn by students and others protesting Botswana's persecution of peaceful Kalahari Bushmen. Three Bushmen, including a child, have been shot in recent weeks, and all their leaders have been arrested, imprisoned and charged with "unlawful assembly". The Oxford protesters wore t-shirts that read "Botswana police shoot Bushmen".