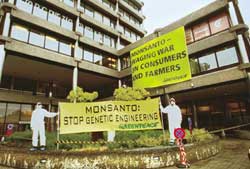 monsanto the world's largest biotech and agro-biotech company -- has reneged on its 1999 pledge of not commercialising sterile-seed technologies. This paves the way for the company to commercialise the terminator technology, which genetically modifies plants to produce sterile seeds.

The biotech major has come up with a revised commitment, which suggests that Monsanto would use terminator seeds in non-food crops. The company has also not ruled out future development and use of one of these technologies. "The company will continue to study risks and benefits of this technology on a case-by-case basis," it says. Meanwhile, the biotechnology industry had pushed the un to end a six-year ban on the commercialisation of terminator technology at the Convention on Biological Diversity (cbd) that was hold in Brazil from March 13 to 17, 2006.

Industry already has support from the governments of Canada, Australia, New Zealand and the uk, which have been campaigning to introduce a pro-terminator recommendation in the cbd. These countries recommend that Terminator technologies be viewed on a case by case risk assessment" basis, clearly echoing Monsanto's language.

At the same time, peasant and ngo movements across the world have confronted the biotech industry and its supporters, demanding a global ban on terminator technology. The sterile seeds will devastate livelihoods of over 1.4 billion people, particularly in the developing countries, who depend on farm-saved seeds, the detractors of the technology say. With the protests gathering force, Monsanto has issued a disclaimer saying that it stands by its 1999 pledge.