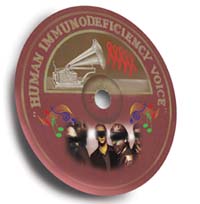 Meet the 'Band of Positive Brothers' from Manipur. This music band has five youngsters--Baijon, Raul, Laajer, Joy and Mahesh; all are hiv positive. They have been performing in schools and colleges across the northeastern states.

They meet at the office of the Manipur Network of Positive People in Imphal, sharing their story. "Don't know how long we will live. But we sure will sing our way to death," says the 33-year-old drummer, Raul. His condition is worrisome and he, like the rest, lives on a daily dose of art (anti-retroviral therapy) drugs.

They also plan to release an album. "We have been singing others' songs. But we will be producing original stuff soon. Perhaps an album by the end of this year," says guitarist Laajer to Down To Earth.

Ask them for a photograph. "We have been performing all over the place. And we have no qualms about being identified. But we don't want our families to suffer. We'll give you photos when we make it big," one of the members says, exposing the bitter truth of social stigma against people like them.

With 24,000 hiv+ people, Manipur is one of the states worst affected by the problem.