Bangalore lakes get a refill

While most of Bangalore is anxious to see the heavens open, the city's Lake Development Authority must be thanking its lucky stars that the monsoon is delayed. For if the rains had lashed the region on June 5 -- as forecast by the India Meteorology Department -- they would have put a damper on an ongoing project to revive 60 waterbodies in Karnataka's capital 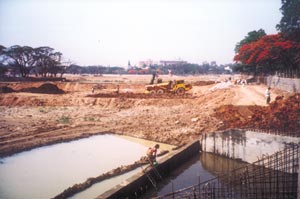 While most of Bangalore is anxious to see the heavens open, the city's Lake Development Authority (lda) must be thanking its lucky stars that the monsoon is delayed. For if the rains had lashed the region on June 5 -- as forecast by the India Meteorology Department -- they would have put a damper on an ongoing project to revive 60 waterbodies in Karnataka's capital.

The lda, an autonomous body instituted in July 2002, has formulated the reinvigoration plan which it is implementing along with agencies such as the Bangalore City Corporation (bcc), Karnataka forest department (kfd), Bangalore Development Authority (bda), and Bangalore Water Supply and Sewerage Board (bwssb).

Mushrooming residential layouts and industrial complexes have resulted in storm water drains being converted into sewerage lines in a large number of wards. Virtually devoid of interconnectivity, more than 81 lakes have become parched. Lakes regularly recharge groundwater resources. The steady fall in their number has led to a sharp dip in the city's water table as well. In 64 per cent of the borewells tested by the state department of mines and geology, the water level has declined considerably. Whereas water could be extracted from a depth of 80-100 feet earlier, it is now difficult to find it even at 250 feet. Apart from this, 10 per cent of the borewells have dried up completely.

Several waterbodies, including Ulsoor lake (located close to M G Road), also serve as dumping sites. Lakes are polluted mainly due to sewage from the domestic and industrial sectors. "The 60 lakes surveyed by lda showed that the levels of mercury, nitrates, potassium and cadmium in the waterbodies were well above permissible limits. The presence of phenolic compounds was also detected," discloses Varma, adding: "People complain about the poor condition of lakes in their neighbourhood because leaching affects the quality of groundwater." The polluted lakes have become ideal breeding grounds for mosquitoes. The bcc, therefore, resorted to breaching a number of waterbodies to check the spread of malaria in the city, causing further damage to them.


The lake project seeks to tackle larger environmental issues through steps that have an immediate impact. Its main objectives are:

• Resuscitation of lakes to boost aquifers

• Preserving the habitat of aquatic life.

"Lake development work has been budgeted under the 10th five-year plan," specifies Varma. A proposal of Rs 250 crore has been submitted to the Karnataka government. "Seventy per cent of the cost of the project will be borne by the Union government (represented by the National Lake Conservation Programme), while the state government would provide the rest of the amount," says Latha Krishna Rao, secretary, state department of ecology and environment. In addition to this, the Indo-Norwegian Environment Programme has granted Rs 10 crore to revive three lakes in Hebbal valley and the National River Conservation Authority has sanctioned Rs 45 crore for the interception of sewage lines.

M N Vidhyashankar, chairperson, bwssb, informs Down To Earth that sewage has already been diverted from 12 lakes that were taken up for desilting this year. "By December 2003, all the diversion work will be completed, except in Bellandur lake," he adds. The waterbody is in the jurisdiction of the minor irrigation department, as it has a relatively large catchment area. Three new secondary treatment plants are being constructed to clean the sewage released into this lake.

T Govardhan of Bangalore Environment Trust, a non-governmental organisation involved in the lake development work, says: "The bcc and the state horticulture department have spent Rs 67.5 lakh to divert sewage from the lake in Lal Bagh Botanical Garden to the nearest wastewater treatment plant." Besides this, the bwssb has set up five secondary and two tertiary wastewater treatment plants at a cost of Rs 600 crore. Funds for these ventures were given by the Japan Bank for International Cooperation and the state government. According to Vidhyashankar, a further sum of Rs 3 crore has been spent on the diversion of sewage lines from Ulsoor lake to the secondary and tertiary wastewater treatment plants.

"In all, seven million litres of sewage can be treated daily. This water would eventually be released into the lakes -- a move aimed at reducing the waterbodies' dependence on rains," states Vidhyashankar. "Precedence is being given to the revival of lakes located upstream so that sewage doesn't flow downstream," points out Rao.

Rainwater harvesting expert S Vishwanath lauds the lda's initiative: "Desilting the networked lakes will help regenerate groundwater. Also, the use of techniques such as Upflow Anaerobic Sludge Blanket (uasb), followed by biological treatment, will ensure that recycled water reverts almost completely to its natural form before entering lakes." uasb treats wastewater by activating anaerobic bacteria in a tank that is continuously fed by water from below. Apart from treating organic solids, this method generates methane also.

Significantly, various people's welfare associations have come forward to assist the government in executing the project. "The residents in the vicinity of Kagadaspura lake, on which work will begin by the end of the year, have even volunteered to make financial contributions. Six to seven bodies are keen to join hands with the lda," reveals Varma.


There was a delay in starting the desilting process because the authorities had to deal with large-scale encroachments. But they see an effective deterrent in the Karnataka High Court's 1995 judgment, which prohibits the use of lake land for any other purpose.

"The work is progressing smoothly now, courtesy the failure of pre-monsoon showers and delay in the arrival of the monsoon," claims Varma. "Rains at this juncture cannot be an irritant because the crucial part of the work is over, with 12 lakes having been desilted," he asserts. Govardhan concurs: "The Bangalore Environment Trust is following the activities closely, and the authorities appear to be geared up to face the monsoon."

Bangalore's denizens, reeling under the impact of two consecutive droughts, may have been further inconvenienced by the project as big lakes were drained prior to desilting. The state government is, however, convinced that one good monsoon season would be sufficient to recharge the waterbodies. Rao strikes an optimistic note: "It is just a matter of time before people start noticing the change." Can we take a rain check on that?