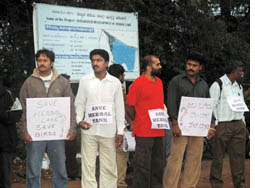 civil rights groups have protested against privatising lakes in Bangalore. The Lake Development Authority (lda) of Bangalore has leased out a few lakes, including the Hebbal lake--among the large humanmade lakes in the city.

Last year, it was leased out for development to Oberoi groups' East India Hotels for 15 years in a Rs 72 lakh deal. Under the plan, a restaurant will come up over the 60.7-hectare lake. Protesters say the common resource is illegally fenced off and will be accessible only to a privileged few.

lda says the move will help clear sewage in the lakes. "The operators will install a sewage treatment plant to treat 4 million litres per day of waste. The remaining sewage will go to Nagavara lake for treatment. The treated water will be released back, as rain water is insufficient to fill the lake," says M Munireddy, chief executive officer of lda.

Subramanya, a resident, says the lake, built in the 16th century, is a public resource. "More than 100 bird species have been recorded at the site over the years, including migratory birds," he says. Munireddy says the birds will not be disturbed.

But Rohan D' Souza, a Bangalore-based expert, says the lake will be damaged. In a study on the impact of privatisation of lakes in Bangalore, D' Souza sites the example of Nagavara lake leased out to a private party in April 2005. "Nagavara has been converted into a sterile bowl of water and the shore has been fully built up which prevents the connectivity between lakes," he says, adding that fishermen were restricted from entering the lake. lda, however, maintains there are no such restrictions.

Citing a Supreme Court judgement on a tank bed in Tirupathi, Leo Saldanha of the Environment Support Group, Bangalore, says lda's move is against the ruling which stated that: "State authorities are trustees to hold and manage such properties for the benefits of the community and they cannot be allowed to commit any act of omission which will infringe the right of the community and alienate the property to any other person or body."