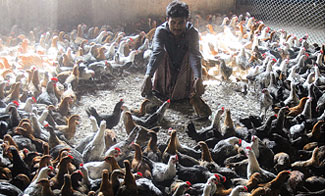 bird flu is spreading in Bangladesh despite efforts to control it. By February 19, the H5NI virus outbreaks had been reported in 43 out of 64 districts. The nation's poultry industry, one of the world's largest, is now confronted with its greatest challenge since large-scale poultry farming was introduced in the 1980s.

The virus was first detected in Bangladesh in late February 2007. Health workers quickly culled 30,000 birds to contain it and the government declared a bird flu outbreak. Since then, authorities have culled 700,000 birds at 157 poultry farms across the country and have imposed restrictions on poultry movement.

Authorities say the situation is under control. But poultry operators are not convinced. The virus, which resurfaced several times in the past one year, has hit hard the nation's us $2.14- billion poultry industry. Over 6.5 million people work in the country's 300,000 poultry farms.

The outbreaks are particularly damaging at a time when the country's economy is under strain after two consecutive floods and a super cyclone.

About 225 million birds, both in commercial and backyard poultry farms, are at risk from the flu. Industry operators say sales have plummeted chicken sales have halved due to panic among consumers. Several restaurants have taken chicken off their menu. There has also been a steep rise in poultry feeds. "The industry has incurred a loss of about Tk 5,000 crore (us $71 million) in the past one year," says Moshiur Rahman, convenor of the poultry industries co-ordination committee. "The situation is so bad that we have to push our chicks to poultry farmers at nominal prices," says Shah Habibul Haque of the Aftab multipurpose farm. Haque's hatchery, one of the biggest in the country, is incurring a loss of Tk 200 lakh every month.

For small poultry farmers the loss is even more. "It is a question of survival for them, since they have to sell a-day-old chicks for Tk 7 each as against the production cost of Tk 22," says Haque.

Authorities have, however, urged people not to panic as the outbreaks have been properly monitored. "The affected farms represent only a fraction of the total number of farms in the country," says Mosaddeq Hossain, chief veterinary officer of the government's Department of Livestock Services. Hossain, whose department is also creating public awareness, says there are safer ways of handling chicken and people should not abstain from consuming eggs--the cheapest source of animal protein. Eggs and chickens cooked at 70oc are safe because the virus does not survive at this temperature, he suggests. The only development that has surprised the health workers during the recent outbreaks is the death of crows from bird flu--something not reported anywhere before. Seven dead crows found in Barisal region, in the southern part of Bangladesh, have tested H5N1 positive and scores of crows are found dead in Dhaka almost everyday.

Currently the Department of Livestock Services and the Directorate General of Health Services (dghs) are jointly monitoring the situation and taking steps to ensure that the disease does not spread to humans. But there is no consensus on how to contain spread of the virus.

Azmat Ali Khan, a veterinary officer of the Dhaka City Corporation, says the virus might be spreading from one farm to another via trading points, where used cages and egg trays are taken back to farms and reused. The corporation has asked traders to use disposable egg trays or to disinfect trays before reusing and to stop reusing cages. Poultry workers have also been asked to clean their hands and shoes when they visit farms.

Health workers are now working to prevent human infection in this densely-populated country with millions of backyard poultry, says Harunur Rashid, programme manager of the avian influenza unit of dghs. So far no human infection has been reported. "We are giving anti-viral drugs to people engaged in culling infected birds. People living in close proximity to sick birds are being closely monitored," says Harun. The government has kept a ward ready at the Chest Disease Hospital in Dhaka to deal with human bird flu cases, while four beds have been earmarked in each of 64 district general hospitals.

But reeling under a severe economic strain and without sufficient awareness, poultry farmers and traders appear to be casual about the dangers.