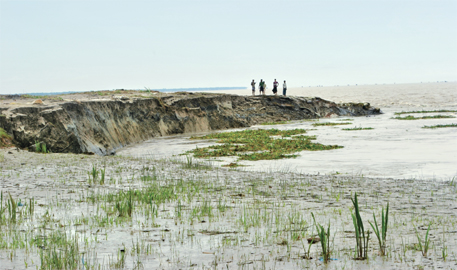 The low-lying Bangladesh routinely tops the list of countries that are most vulnerable to the impacts of climate change. Studies have shown climate change is putting at risk the lives and livelihoods of the 50 million people who live below the poverty line. Unfortunately, the government has little consolidated and authentic data to gauge the extent of the problem.

In its attempt to outline the current status of the country’s environmental situation, the country’s Department of Environment (DoE) has recently published a report, Bangladesh Environment and Climate Change Outlook 2012. The report is a compilation the status of land resources, water resources, biodiversity, air quality, waste management and climate change.

The report tries to identify the link between the negative impacts of climate change and different sectors of the environment, said Raisul Alam Mondol, Director General of DoE, while releasing the report. It would help the government take sustainable measures toward stopping environmental degradation, he added.

The DoE has produced the report as part of the country’s environmental status submission procedure to the United Nations Environment Programme (UNEP).

Addressing as the chief guest, Deputy Minister for Environment of Forests Abdullah Al Islam Jacob said the Awami League government had inserted the environment issue in the Article 18 (A) of the Constitution to protect the country's biodiversity and ecosystem.

He said the government has already announced four rivers—Buriganga, Balu, Turag and Shitalakhya—surrounding Dhaka city, as ecologically critical areas and taken steps to revive the rivers.

Earlier in 2001, the country prepared its first environment outlook which was named State of Environment Report 2001.