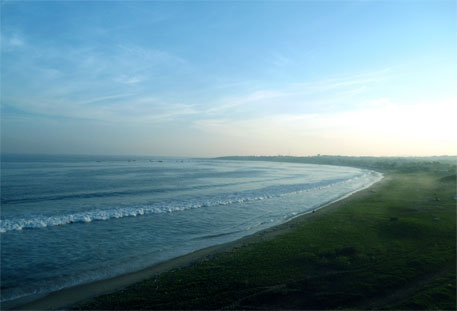 Ending four decade-long dispute between India and Bangladesh, the UN tribunal on Tuesday awarded 19,467 square kilometers, four-fifth of the total disputed area of 25,602 sq km in the Bay of Bengal, to the latter.

The talks on resolution to the maritime dispute over territorial waters, which started from the formation of the country in 1971, first began in an official negotiation in 1974. But when bilateral efforts to solve the issue marked no progress for next 28 years, Bangladesh then moved to UN’s International Tribunal for the Law of the Sea (ITLOS) in 2009. The issue went to the Permanent Court of Arbitration (PCA) at The Hague later in May 2011.

The conflict was largely over delimitation of the territorial sea. While India wanted the determination of the boundary on ‘equidistance’ method which means a nation's maritime boundaries should conform to a median line equidistant from the shores of neighboring nation-states, Bangladesh was pressing for equitable solution (a solution that led to equitable access to resources) to be reached by keeping in focus all relevant circumstances.

Bangladesh and India have welcomed the decision of the UN tribunal which was told to both the parties on Monday but kept under a 24-hour embargo before being made public on Tuesday. The verdict is binding on all parties and there is no option for appeal. Bangladesh had won a similar case against Myanmar in 2012 at the International Tribunal for the Law of Sea in Hamburg, Germany.

During India’s external affairs minister Sushma Swaraj’s visit to Dhaka in June this year, spokesperson of the ministry Syed Akbaruddin had said that both the countries would act in accordance with the verdict since they went to the court voluntarily. Once the judgement was out, the Indian official said, “We respect the verdict of the tribunal and are in the process of studying the award and its full implications…”.

Bangladesh, which said it was satisfied with the decision, applauded India for its approach. Bangladeshi foreign minister Abul Hassan Mahmood Ali said in a news conference, “We commend India for its willingness to resolve this matter peacefully by legal means and for its acceptance of the tribunal's judgment.”

When asked about how successful he thinks the country was in its battle, Bangladeshi foreign minister added, “A peaceful resolution to a dispute running for more than 40 years since independence has been achieved. Which success is larger than that?”

The dispute that had been going on for years is believed to have deterred companies from investing in the sea blocks in region. A statement by the Ministry of External Affairs said, "This paves the way for the economic development of this part of the Bay of Bengal, which will be beneficial to both countries."