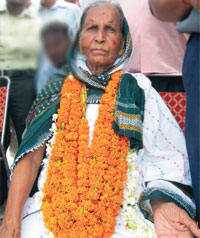 In August, western Odisha was shut down 13 times to protest the state government’s decision to build three barrages on the Mahanadi river. They are meant to dam surplus water downstream of the Hirakud reservoir to generate 320 MW power, and, as recently announced, to irrigate farms.

On August 15, in Sonepur district where one of the barrages is to be built, Lokamata Panigrahi, a 92-year-old woman, hoisted the national flag. She was displaced by the Hirakud dam in 1952 and is yet to get compensation. Her adopted village Kutmenda will now be submerged by the barrage. “Nothing has changed in the past 60 years; power cuts and droughts remain,” she says. “We constantly get displaced, but won't allow it this time.” People boycotted the official Independence day function.

The other two barrages are to be built in Sambalpur and Baud districts. Their impacts like submergence of villages and agricultural and forestland have either not been studied or have not been made public. The three barrages will be within 75 km of Hirakud dam.

These barrages were conceived as Hirakud Stage-III in 1995. Protests forced the government to shelve the proposal. In 2003, chief minister Navin Patnaik assured the project would not happen. The MoU, therefore, came as a surprise to everyone, including ruling party members of the Legislative Assembly. At that time the state government said the project would submerge 118 villages and 14,973 hectares (ha) of fertile farms. Recent media releases indicate a change in design, which will submerge just 28 villages and displace 1,850 families. There is no study to support this claim. Residents of villages around the proposed barrages say some 40 more villages will be marooned by the three barrages. The tributaries will be flooded round the year, affecting many more villages.

The proposal comes at a time when the government has already roped in 32 companies to produce 36,000 MW thermal power. Twenty-three of these projects are in the same or adjoining districts. What’s more, it is a known fact that Hirakud reservoir does not have enough water to meet both irrigation and power generation demands.

Local leaders see the sudden revival of the project in the light of the conflict between farmers and industry. Industrial use of water from the reservoir has increased six times between 1997 and 2007. “Given the secretive way the MoU was signed, there must be some other motive for the project than just power generation,” alleges Siba Narayan Sahu, a community leader from Sambalpur who has been spearheading the protests. “The state is already generating more than its peak demand of 4,000 MW. Given the location of the barrages near industries and mines, it is meant for them,” says Artabandhu Mishra of Water Initiative Orissa (WIO), a network of NGOs and experts working on water-related issues.

It is doubtful whether Hirakud has surplus water to spare for the barrages. Government data analysed by WIO shows that the capacity of the reservoir is reducing 0.4 per cent annually. Its original capacity was 4.72 million acre feet (MAF) (5,822 million cubic metres, or MCM) and has fallen to 3.92 MAF (4,835 MCM). What’s more, water flow to the reservoir is reducing five per cent a year, triggered by increasing water use from Mahanadi in Chhattisgarh. An analysis by Delhi non-profit, Centre for Science and Environment, shows the state will draw 3,700 MCM water from the Mahanadi for its planned industrialisation. This will further reduce water flow to the reservoir.

In the last week of August, the speaker of the Legislative Assembly set up a house committee to conduct public hearing on the project. Members of Opposition parties refused to be a part of it. Local residents have rejected the idea outright. “When we demand closure of the project, where is the need for public hearing?” asks Sahu.