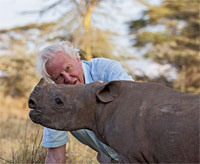 In a climbdown, BBC has admitted getting its facts wrong in its flagship TV series Africa. In the episode broadcast on February 6, iconic presenter David Attenbourg told viewers: “Some parts of the continent have become 3.5°C hotter in the past 20 years.” BBC has since admitted “that is disputable” and has re-edited the episode. The presenter’s words have been replaced with a lengthened musical score for the repeat episode and in the version for Iplayer service.

Many took to Twitter disputing the 3.5°C rise. Experts also questioned the figure, with Tim Osborn of the University of East Anglia’s Climatic Research Unit telling The Guardian, “Our data do not support the claim of 3.5°C warming in the last 20 years in some regions of Africa.”

BBC initially defended the claim, saying it was taken from a report by Oxfam and the New Economics Foundation (NEF). But investigations revealed that Oxfam and NEF had relied on a Christian Aid report, which drew on a somewhat vague source: “conversation with authors, February, 2006”.