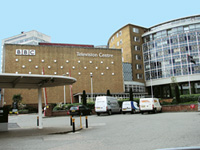 bbc has a mixed environmental record, according to the recently released bbc's Corporate and Social Responsibilities Report 2006.

Carbon emissions went up to almost 0.25 tonnes per broadcast hour in 2005, compared to just over 0.15 tonnes the year before.

The total waste per employee also rose, from almost 250 kg per person to just under 300 kg. However, recycling improved from 30 per cent to around 37 per cent.

More than 95 per cent of the electricity used by bbc came from hydroelectric power stations and wind farms. Despite the fact carbon emissions went up, the bbc claims it is still on target to meet its original objective to reduce carbon emissions by 8 per cent between 2002 and 2010.

In the past, bbc used to issue a separate environmental review. But the public bradcaster has now decided to amalgamate its record on achieving its green targets into its report on corporate responsibility.