Google is sending out messages to users that their Gmail accounts may have been targeted by state-sponsored cyber-criminals. The warnings, which Google security officials began sending out October 2, are coming after its security officials gleaned new information about cyber-attacks and their perpetrators, The New York Times reports. 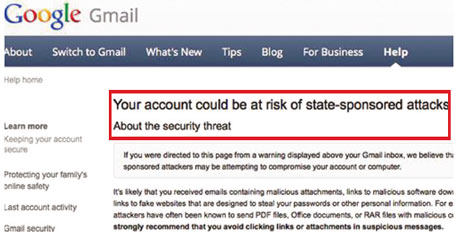 The latest round of messages comes four months after Google alerted users that the company was going to begin warning them of such attacks that come in forms of malware and phishing attacks. Though China has been a chief suspect of much of the state-sponsored attacks seen in the world, Mike Wiacek, a manager in Google’s information security group, told the Times that the company had seen a jump in state-sponsored attacks coming out of West Asia. He declined to name the countries, adding that they were coming from “a slew of different countries” in the region, which had been wracked by turmoil following the Arab Spring.