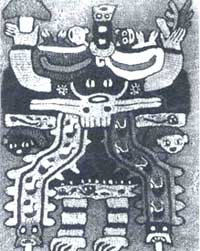 BEANS are one of the few crops grown for beauty as well as nutrition. Archaeologists in South America have excavated beautiful, multicoloured bean seeds buried with Indians 10,000 years ago. Analysis showed the Indians ate only fresh, young bean pods and seeds. Pottery, which made boiling beans possible, began only 6,000 years ago and therefore dry beans could not have entered their diet earlier.

Before written languages evolved, tribes may have used beans as coded messages, Daniel Debouck of the International Centre for Tropical Agriculture at Cali, Colombia, speculates. "Early farmers also gave trade values to patterns of seed colours," he says. Pre-historic Americans painted bean figures on ceramics, and embroidered them on shrouds and weavings. Historians think that such seed shapes and patterns carried religious meaning.