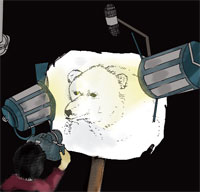 BBC’s documentary series Frozen Planet has got bad press after revelations that some scenes were filmed in a zoo.

Footage of a polar bear inside a den with newborn cubs was mixed with scenes shot from the wild in the episode Winter. The accompanying voiceover from David Attenborough referred to cubs being born “beneath the snow”.

But BBC denied misleading viewers. “The sequence would be impossible to film in the wild,” its spokesperson said, adding, “The filming was standard practice for natural history shows”.

BBC’s rival The Telegraph alleged, “The truth about the sequence was not disclosed in the programme. Only viewers who visited the Frozen Planet website and stumbled across a video by the producer, Kathryn Jeffs, would have learned that they had been watching bears in captivity.” BBC retorted, “The commentary is carefully worded to not mislead the audience.”