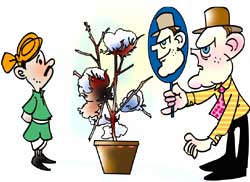 Leading farmer body Bharat Krishak Samaj has strongly objected to it, as it could threaten the poor farmers' control over seeds. tt is also known as genetic use restriction technology (gurt), which refers to a switch mechanism that controls the reproductive capability in plants. This makes the seed viable for only one season. It has serious implications in the Indian context as more than 70 per cent of the farmers use farm saved seeds.

G S Gill, country manager, displ, informed Down To Earth that the company is not working on terminator seeds in India and has also not applied for any patent in the country. Moreover, the Seeds Bill, 2004, which is with the Parliamentary Standing Committee on Agriculture, prohibits the use of tt . But farmers doubt the motive of the company. This also makes the Indian government's own stand on tt rather ambiguous as on the one hand it rejects the technology overtly while on the other it permits the inventors and patent holders a smooth passage in the country.

displ is focusing its activities on the three main cotton-growing regions of north, south and central India. "India, being a large potential market for cotton seeds, has an important place in d & pl global marketing strategy," says Gill.

d & pl and the us department of agriculture are the only owners of the original prototype terminator patent.