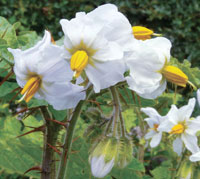 MOST flowering plants, equipped with both male and female sex organs, shun the path of self-fertilisation and wait for insects and birds or even a whiff of wind for pollination.

This is because the rate of extinction is higher among species who opt for self-fertilisation compared to those who rely on cross-fertilisation, said biologists led by Emma Goldsberg at University of Illinois in USA. Though the theory is well-established, the biologists recently evaluated it by analysing the evolutionary data of the large and diverse plant family, Solanaceae, with the help of a mathematical model.

There are about 2,700 species, including crops like potato, tomato, capsicum and black pepper, in the Solanaceae family.

Plants opting for self-fertilisation have low genetic diversity, said Kelley Robertson, a researcher associated with the study. Because of poor genetic recombination, erroneous mutations might persist whereas beneficial mutations might be kept at bay, increasing the probability of extinction in the long run, Robertson added.

This is the reason most species of Solanaceae family shun the trait of selffertilisation, despite immediate advantages like mating assurance and passing on 100 per cent genes to the next generation, the researchers suggested in the October 22 issue of Science.

Cross-fertilisation helps avoid harmful effects of inbreeding, but it has disadvantages, said Stephen Wright, evolutionary biologist at University of Toronto in Canada.

Plants produce offsprings that are just 50 per cent related to them. This reduces transmission of their beneficial genes to the next generation. Also, fertility can be compromised if pollinators are unavailable. “Some flowering plants have lost the trait of cross-fertilisation during the course of evolution due to these disadvantages,” said Wright. Once this trait is lost, it cannot be regained because of its complexity. This implies the trait of cross-fertilisation trait can become extinct. Yet, at least half of all living flowering plants depend on crossfertilisation, he added.

The researchers found at least 57 per cent of the species opt for self-fertilisation, 41 per cent rely on cross-fertilistion despite the presence of both the sex organs and 2 per cent have separate male and female plants.