Berlin reconciles to its history 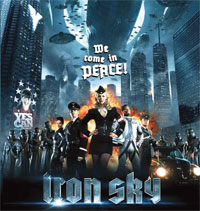 One would hardly expect a film about Nazis invading Earth to be screened at an International Film Festival in Berlin, a city that feels weighed down by its history. But the Finnish sci-fi comedy Iron Sky has turned out to be one of the most talked-about films at this year’s festival. The plot revolves around a group of Nazis who escape to the Moon at the end of World War II to plan a new assault, and invade Earth in 2018. The film features a fictional US president with more than a passing resemblance to former Alaska governor Sarah Palin.

Added to the farce is a navy cruiser called USS George W Bush. According to a BBC report, its appeal has been hailed by some members of the international press as a sign that Germans are now at peace with their Nazi past. Yet, local journalists are more cautious. BBC quoted Kerstin Sopke of the Associated Press saying: “It’s still a delicate subject here ... but actually I think they did the comedy well.”