What makes a kid more intelligent than his peers? Mother's milk might hold the answer 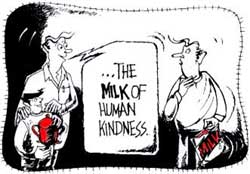 SEVERAL studies show how human breast milk is far superior to the much-advertised artificial milk formulae. Compared to infants fed on these, those fed on breast milk have lower rates of diarrhoea, ear infections and bacterial meningitis an infection that causes inflammation of the brain and spinal cord. In this debate over whether babies should be on a diet of breast or bottled milk, a new point has surfaced, proving to be most persuasive results of a new study indicate that breast-feeding is associated with detectable increase in cognitive ability and educational achievement of a child. Paraphrased, this means babies fed on breast milk are likely to be more intelligent.

Teenagers breast-fed for at least eight months during infancy tended to perform better academically than other adolescents. Of more than 1,000 kids studied, those who were breast-fed the longest scored the highest on standardised tests and intelligent quotient (IQ) exams. These teenagers also rated better on various other school evaluations than those who were not breast-fed or were breast-fed for less than eight months, according to the researchers L John Horwood and David M Fergusson of the Christchurch School of Medicine in Christchurch, New Zealand (Paediatrics, Vol 101, No 1).

The study was based on children born in New Zealand in 1977. Evaluations were conducted at birth, when they were four-months-old, when the children completed one year, and then annually from ages eight to sixteen, and finally at 18 years of age. It looked at the relationships between the duration of breast feeding, their cognitive ability and academic achievement over a period of eight to eighteen years. The data were collected in the course of an 18-year longitudinal study beginning at birth of over 1,000 children.

From birth to a year of age, information was collected on breast feeding practices. Then, over the years the children were tested on a range of measures of cognitive and academic performance. These included measures of child IQ, teacher ratings of school performance, standardised tests of reading comprehension, mathematics, and scholastic ability, and finally, their pass rates in the various school-leaving examinations.

Longer breast feeding was found to be associated with consistent and statistically significant increases in the children's IQ, reading comprehension, mathematical ability, scholastic ability, teacher ratings of reading and mathematics, and better grades in school leaving examinations. The duration of breast feeding, say the researchers, remained a significant predictor of the cognitive or educational outcomes. Breast feeding, it is concluded, is associated with small but detectable increases in the cognitive ability and educational achievement of children. The beneficial effects of breast feeding in the New Zealand study were long-lived and extended throughout childhood into young adulthood.

The New Zealand study is not the only one that suggests breast feeding helps the children's cognitive abilities and academic achievements. Longitudinal studies have consistently shown that breast-fed babies do better in these respects than bottle-fed babies. What makes the difference? Data from an experimental study of premature babies show that children whose mothers elect to express their own breast milk, later have higher developmental scores and higher IQS. Thus, the breast milk itself appears beneficial.

What is in breast milk that is so good for the brain? Research has suggested that the helpful factors may be long-chain polyunsaturated fatty acids including, in particular, docosahexaenoic acid (DHA). When DHA was added to infant formulas, premature babies appeared to show better visual and cognitive abilities.

The New Zealand investigators observe that their findings "underwrite the need to encourage breast feeding and to continue the development of improved infant milk formulae with properties more similar to those of human milk". They do believe that their results most likely "reflect the effects of polyunsaturated fatty acid levels and, particularly, DHA levels on early development". Though the mothers in the study who breast-fed their infants tended to be from a higher socio-economic group and more educated factors which might explain the higher test scores among their children, the researchers still found a "small but detectable increase in childhood cognitive ability and educational achievement" when these factors were considered.