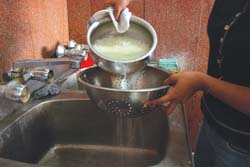 contamination of groundwater by arsenic, a well-known phenomenon, has now shown up in a different form. Scientists working in the Bengal delta have found that rice grown with or boiled in contaminated water has arsenic residues that are poisoning people in affected areas. The scientists have devised a rice cooker that can eliminate most of the arsenic.

"Villagers still use the traditional method of washing rice, boiling it and draining the water out. This gets rid of about 60 per cent of arsenic," says Dipankar Chakraborti, head of the School of Environmental Studies, Jadavpur University, Kolkata. The other way of cooking rice, consisting of boiling washed or unwashed rice till all the water is absorbed, is dangerous. The arsenic content in rice cooked this way was found to be more than that in raw rice, Chakraborti adds.

While arsenic concentration in raw rice was measured at 50 microgrammes per litre (the who standard for developing countries), the scientists observed an average increase of 35-40 per cent in cooked rice.

The School of Environmental Studies, which conducted the research in the Bengal delta, has applied for a patent for the new cooker, which is expected to go into commercial production by the end of this year. It is fitted with a central colander, which makes the process of thoroughly washing and draining the water from the rice easier and faster and has a label that instructs the user to wash the raw rice a number of times.

In China, researchers led by Zhu Yongguan of the Research Centre for Eco-Environmental Sciences at the Chinese Academy of Sciences have also showed that when rice grows in flooded fields, iron deposits are trapped in their roots, which protect rice plants from arsenic contamination. The researchers also showed that more iron deposits form when phosphorous levels in soil are low. "This implies that if a low-phosphorus chemical fertiliser is used, arsenic may be blocked from moving to rice seeds," says Zhu.
The issue of arsenic contamination assumes more alarming proportions given a study conducted by researchers at the University of Aberdeen in the uk which showed that Indian rice contains high levels of arsenites and arsenates, the more toxic compounds of arsenic.

However, in the absence of any epidemiological evidence, scientists are not panicking yet. Chakrabarti argues that while high levels of arsenic in rice have been established, studies still need to be conducted on the effects of contaminated rice.