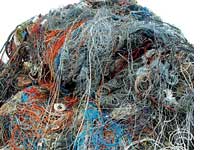 incineration of plastic that is non biodegradable leads to emission of cancer-causing dioxins. Researchers from Kolkata say they have developed a better disposal mechanism that cuts down emission of harmful chemicals.

The researchers used zinc oxide, ultraviolet (uv) rays and dye to degrade polyvinyl chloride (pvc), a plastic commonly used in pipes. They found zinc oxide degrades the plastic effectively under the influence of light. First, a solution of pvc in an organic compound, zinc oxide and dye was made. Then a composite film of pvc, zinc oxide and dye was developed. The film was made to pass through a uv source in water in the presence of oxygen. The degradation was detected by measuring the weight loss of the film. They found that because of the zinc oxide, partial weight loss reached a maximum of 20 per cent over two hours. The dye accelerated degradation.

Besides co2, other degradation products included aldehyde, ketone and carboxylic acid functional groups of organic compounds, which are not as harmful as dioxins. In our method, complete degradation will emit carbon dioxide, says lead researcher Sampa Chakrabarti from the Department of Chemical Engineering, Calcutta University. Our future work will focus on how to reduce the emission of carbon dioxide, she adds.

The disposal technique is a starting point as a solution to a major environmental problem, say the researchers. The findings of the study will appear on June 15 issue of Journal of Hazardous Materials (Vol 154, No 1-3). The photo-catalytic oxidation of pvc with zinc oxide is a novel and alternative route to degradation of plastic, says Jayanta Kumar Basu, associate professor at the Department of Chemical Engineering, Indian Institute of Technology, Kharagpur. pvc packaging substances with the new photodegradable properties may solve the waste disposal problem considerably, he added.