After not appearing for three years, the Olive Ridley turtles return to the Orissa coast for mass nesting. Conservation efforts seem to have finally paid off 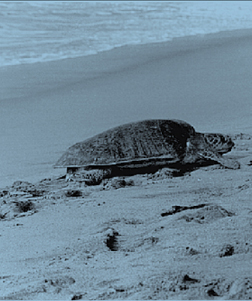 AFTER an unprecedented three-year absence, Olive Ridley turtles have returned to their Eden — the Gahirmatha rookery on the Orissa coast — for arribada (Spanish for mass nesting). Around 40,000 turtles were killed in the past four years by trawlers. The mass nesting of the Schedule I species began on the night of March 25, in Pentha and Nasi-2, two small islands in the Gahirmatha Marine Sanctuary. “It’s a mad rush. There is not a single inch of space left without turtle eggs on the beach”, said S K Patnaik, the chief conservator of forest (Wildlife), Orissa. “Eight thousand giant Olive Ridley turtles struggled out of the sea to nest on the sandy beaches of Ekakulanasi in the early hours of March 25. They were followed by 100,000

more the next day,” said Belinda Wright, executive director of the Wildlife Protection Society of India (WPSI), which led the ‘Operation Kachhapa’ conservation project along with the Wildlife Society Of Orissa (WSO) and the Wildlife Institute of India. Till April 7 approximately 300,000 turtles had nested. During the last nesting season Gahirmatha saw a pathetic 50 turtles nesting over a four-month period. Some 15,000 dead turtles were washed to the shore. What startles turtle experts is that the current mass nesting continued during the day too. On March 26, in Ekakulanasi, around 80,000 turtles continued nesting throughout the day and night, laying an average of 150 eggs each. Experts say that this is an unusual phenomena as Ridleys nest only during the night and return to the sea at dawn. “It’s inexplicable but heartening,” said Patnaik. Discovered in 1972, the Gahirmatha rookery is believed to be the largest nesting ground in the world for turtles. An average five million Olive Ridleys arrive for nesting every year. But for the last two years mass nesting did not take place. Only twice have the mass nestings failed — in 1982 and 1988. This failure was caused by large-scale killings and disturbances on the turtles’ natural path to the Orissa coast. It was also discovered that the turtles were abandoning the Orissa beach and shifting northwards due to increasing human activity around the beach. Environmentalists and conservationists were alarmed by this development as the coasts of Mexico and Costa Rica, two other famous rookeries, were earlier abandoned by this endangered species. In December 1998, when the turtles reached the Orissa shore a strict vigil was maintained at the Gahirmatha beach and two new rookeries with the Coast Guards keeping a watch on illegal trawlers. The forest department also diverted its attention to this beach and the WPSI along with the WSO led an operation called the ‘Operation Kachhapa’ to save the reptiles. Even the Defence Research and Development Organisation (DRDO), which has a missile-testing base in the nearby islands, decided to postpone testing the Agni-II missile to facilitate nesting. “By any standard, it is the best protection given to any wildlife species in the country,” said Patnaik last October while briefing mediapersons about the conservation plan which is monitored by a high-level committee led by the Orissa chief minister. The strict vigil, however, triggered off protests from trawler owners and local fisherfolk. Experts also agree that the mass nesting was a result of protecting the beach from trawlers. “The protection of the beach worked as a social facilitation for the turtles,” said Priyamada Mohanty Hejmadi, a reputed sea turtle expert. It may be mentioned that mass nesting is unique to the Olive Ridleys. “We are thrilled. It is as though these endangered turtles have responded to our massive efforts to protect them,” said Wright. Meanwhile, there are reports that mass nesting was in progress at the other two rookeries — Devi and Rushikulya river mouths. With this, all the three rookeries have reported nesting.
Print edition Print edition News News News Wildlife Wildlife Wildlife Turtles Orissa Nature Conservation Nature Conservation DTE Fact sheet Water Resources Parliament India Water Quality Political Parties Political Parties Desalination Desalination Water Pollution Drinking Water Drinking Water Drinking Water factsheet Factsheet
Donate Now