Bottlers agree to take off colas from schools 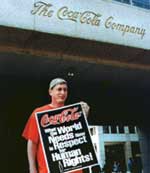 It's not a good season for Coca-Cola. It's been pushed into damage control on several fronts.Under an agreement, the beverage industry in New York -- particularly the country's top three soft-drink companies -- have announced that with the beginning of this fall, they will start removing sweetened drinks like Coke, Pepsi and iced teas from school cafeterias and vending machines.

This was in response to the growing threat of lawsuits and state legislation. The agreement was brokered by the Alliance for a Healthier Generation, a collaboration between the William J Clinton Foundation and the American Heart Association. Under the agreement, between beverage makers and health advocates, students in elementary school would be served only bottled water, low-fat or no-fat milk and 100 per cent fruit juice in servings no bigger than eight ounces.

In Japan, Coca-Cola has said that it will recall around 570,000 bottles of soft drinks as they have found iron powder in them. The beverages were manufactured between March 26 and 30, 2006, at one of the group's factories in Shiga prefecture in Japan. The six affected products are 2-litre Aquarius and 500-ml Qoo Tottemo Orange bottles, as well as Coke, Diet Coke, Fanta Orange and Fanta Grape bottled in 1.5-litre containers. Coca-Cola says that a minute amount of iron powder had been found due to a malfunction of measuring equipment installed on the production line.

Even then, Coke claims that if consumers drink the beverages mixed with the powder, they would suffer no harm.